Through the years, it seems like with everything, it’s either feast or famine. I can remember when I loved buying shoes and clothes, I’d go into the store and find a dozen dresses or shoes that I loved. Then, there would be times when, no matter how hard I searched, I found nothing. Same with quilts and fabrics. When I had several magazine subscriptions, it would seem like for several issues, I wanted to make every project in each magazine. Then, for months and months, nothing appealed to me.

It’s been the same with knitting. Seems like either Denise or Amy are always sending links to patterns and I rush to buy them because they’re so adorable but for a while, even those two haven’t been sending me links to patterns.

The past few weeks, I’ve felt weird about knitting. I unsubscribed from a bunch of groups on Ravelry, I unsubscribed from pretty much everything yarn related except The Loopy Ewe. A couple of friends have sent links to discontinued colors that I must buy or new yarns I cannot live without but I’ve had no interest. Leaving a couple of Ravelry groups where I had been spending way too much time left me feeling a bit empty in the knitting world, but I knew I had done what I needed to do so I didn’t go back.

This past week a friend sent me links to several podcasts she enjoys. I’ll talk about them later and share links. The ones I’ve listened to have rekindled my knitting flame . . which wasn’t nearly extinguished but simply wasn’t blazing quite like it had been.

Maybe it’s just me but it seems like in the last few days, mystery knit alongs have caught my attention. Maybe it’s the unfamiliar that’s drawing me in . . not having a clue what it’s going to look like when done. Knit Alongs are a bit like test knits for me in that I have a much better chance keeping up and getting things done in a timely manner than with a lot of the things I start.

I have finished several things so far this month. I’m really excited about Loopy Academy too. We should find out on February 1 what we need to make. I was thinking about trying to double dip and get some of the knit alongs to work with Loopy Academy but not knowing what the final project will look like, I think I’m going to not do that. I am hoping I can work January Thaw into the Loopy Academy projects. I really want one of those for me.

The knit alongs I’m planning to start and hope to keep up with are:

Hale Bopp MKAL – MKAL = mystery knit along = you don’t know what the final outcome will be. This is the yarn I’m thinking I’ll use. 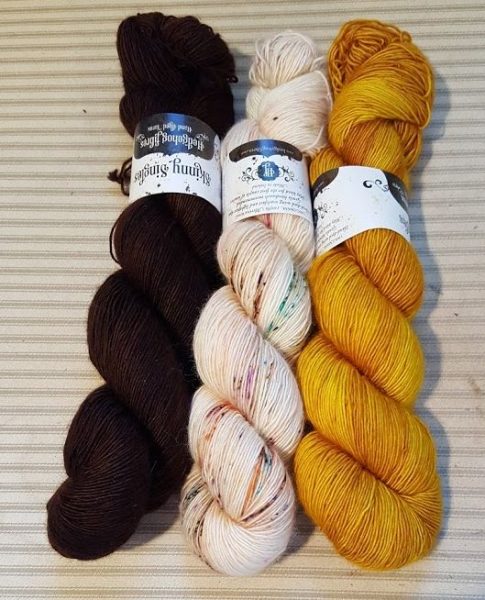 Kirsten Kapur’s Mystery Socks – Not sure what yarn I’ll use but we know I have plenty of sock yarn around here!

The Girl from the Grocery Store – The official KAL (at Joji’s Ravelry group) actually ended yesterday but I still want to make it. Maybe this one will work with Loopy Academy. There’s an ongoing KAL at Grocery Girls’ Ravelry group and it ends on February 27 so I still have time to get in on that one.

That’s probably enough to keep me busy through February!  🙂