After making shawls and sweaters, this should have been a piece of cake. 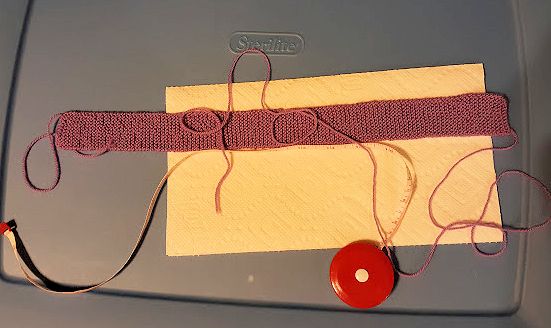 It’s simply straight knitting. No increases. No decreases. No lace. I wanted the knitted strip to be about 15.5″ long. I knitted til my piece was exactly that length. Then I decided . . before going any farther, I would soak and block it because the stitches look much more even after soaking and blocking. The minute I stuck it in the water, I thought . . superwash wool! Superwash grows. I should probably have either knitted it only 14.5″ or used non-superwash wool. Too late.

Once I spread it out and scrunched it up, being ever so careful not to stretch it . . it was almost 18″ long. Way too long. OK . . it’s superwash. I can stick it in the dryer. It was late. I was tired. Vince was already asleep. I threw a damp dish towel in the dryer with it, turned the dryer on, took a quick shower. Got out and it was down to 17″. Still too long and still a bit damp. Nothing else to do but rip back some of the knitting. I ripped it back to about 15″. Layed it flat and this morning, it’s about 15.5″, which is where I wanted it.

I’m wondering if, while handling it to get it finished, it’s going to grow more and if being superwash, it will hold it’s shape enough to serve its purpose. It’s supposed to be a headband .. this headband.

I’ll finish it and see what happens but I won’t use superwash wool for the next one.