Today didn’t go quite according to my plans. Vince wanted to go to Walmart and at first I said no but then felt bad and said I’d go. They are starting to get in their spring gardening supplies so I bought some peat cups to start seeds. I’ll go ahead and start those probably this week and then can transplant them to bigger cups (usually cans from veggies) and get a bit of a start on spring. 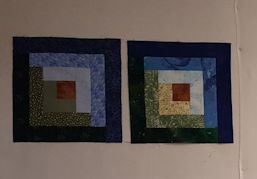 On my 12 log cabin blocks, I had planned to make them scrappy  using greens and blues but I don’t like the two I’ve made so far. I had plenty of blues that worked fine but lighter greens end up being too yellow (block on the right) and the block in the left, the light green isn’t light enough so I have gotten out almost every green in my stash and played around and I think I have a combination I like . . but the first block isn’t made yet. If I like it, I’m just going to make all 12 blocks the same and be done!

Hopefully I can get at least one block made before time to go back to the house.