For so many years, I had dozens and dozens of pairs of shoes. If I had a pink and green dress, I had pink and green shoes to match. Vince and I met in about 1995 and I saved the jacket and the shoes I was wearing. I’m sure I still have them somewhere. I was wearing this jacket:

Vince, being pretty plain Jane, probably thought . . well, we probably don’t want to know what he thought. In the least, he should have thought . . this girl could cost someone big bucks so he shouldn’t be complaining so much about the yarn budget, considering that I no longer spend much on shoes and clothes!

But . . I don’t know why dealing with the chickens and my shoes has become such an issue for me. I’ve had chickens for 7 or 8 years now but this winter has been a constant problem. I keep tennis shoes on in the house. If I go out to the coop or the greenhouse, I have to take off my shoes and put on rubber boots. I have to shake the boots out, beat them against the concrete to make sure there are no spiders or scorpions in them, then put them on, then when I pull them off, half the time my socks stay inside the boots. Dig out the socks, put my tennis shoes back on  . . and sometimes I go through this routine 5 or 6 times a day . . or more

One day a couple of weeks ago, I slipped on Vince’s outside Crocs to go out there. I had on hand knitted socks and those shoes flipped up a pile of chicken poop. It landed inside the back of the shoe. The minute my heel went down . . squishy, cold and wet. Not good! Won’t do that again. Helen was so right!  🙂

I came up with a plan. I needed galoshes! Something I could put on with my tennis shoes on, then slip off and never have to take my shoes off. 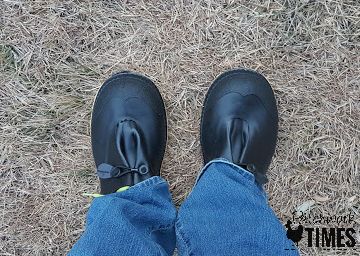 Vince, a/k/a Mr. shopper, got online and found us each a pair. Just what I needed. As I put them on last night to go out to the coop, I thought . . if my friends could see me now!  🙂

I’ll get a plastic tote that seals (somewhat) and keep my galoshes on the porch in that tote. Easy on, easy off . . my problems are so easily solved!