This post isn’t meant to be a tear jerker for you . . it will be for me, no doubt.

We took Speck to the vet on 12/23 for a nail trim and to get the vet to listen to his heart. We’ve changed his heart meds a few times and I didn’t know if there were any more options. Speck was 16 years old in June and we know we’re getting to the end of this path.

Our vet is so kind and so jovial. We can hear him when he’s in the neighboring rooms talking with other patients. Every time we’re there, I tell Vince . . Dr. Speck should be the poster child for an “I Love My Job” campaign.

A couple of friends who use him have recently had to have their dogs put to sleep and they’ve told me how great he was with the whole procedure and aftermath.

He listened to Speck’s heart and he looked up at us and shook his head and said “His heart sounds as bad as it can get.” He then told us there’s not much more we can do as far as meds. We’re reaching the end.

He’s been such a good dog and we’ve loved him so much.  The past few years, as he’s gotten old and grumpy, have been tough. He doesn’t hear. He halfway sees. He gets in front of us and stops and never knows that we almost break our necks to keep from stepping on him. He’s snippy and he’d just as soon bite us as not if we cross him, but we still love him.

No matter how much I think I’m ready for this . . there will be lots of tears. Vince has built him a sturdy wood box. We want to bury him out here and simply digging a hole isn’t enough because of other critters.

I remind myself daily that he’s a dog. There are folks going through this . . dealing with near death situations, and then the actual loss of family – parents, siblings and the worse – children. There are people battling life threatening diseases. We are blessed .. Speck is a dog. We will cry. We will be sad for a time but life will go on. 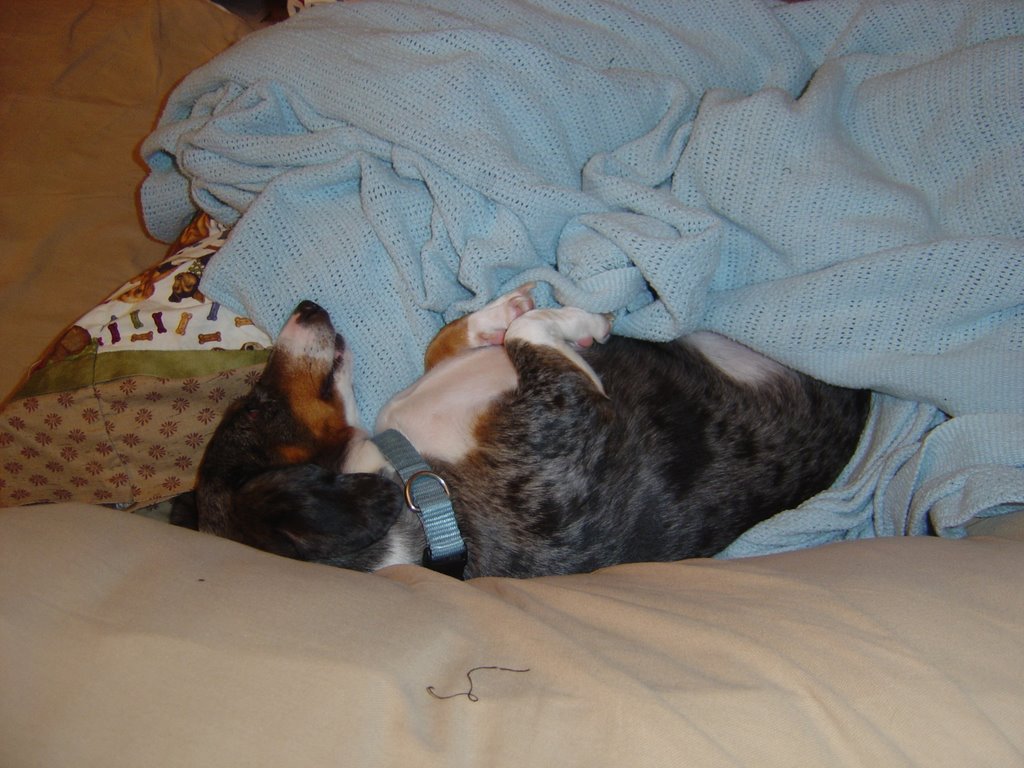 Funny how some things never change. That picture is from 10 years ago. I still have that same slip cover on the sofa in the sewing room. Speck still has that same pillow and pillow case. We still use that same old blanket for the dogs. The fabrics have faded and Speck is a bit grayer now. He does have on a harness these days instead of the collar.

For now, he isn’t gone yet, so we give him the treats that we only gave him in small portions before because we always had to watch his weight. We hug him a little more, we stop to give him a pat on the head where would have walked right by a few years ago. We will make the best of the time we have left with him and my hope is that he simply doesn’t wake up one morning and I never have to make the choice that it’s time for him to go . . though I can if I have to do it that way.

We’re as ready as we can get. We know we’ve given him as good a life as any dog could have.

There are some funny stories involving Speck. In 2004 when we went to Vermont, we took him with us. We were in a hotel one night and had ordered a pizza. When we opened the door to get the pizza, Speck ran out the door. We were on the first floor and Vince went running after Speck. He ran by the front desk and kept going . . Vince was running right behind him and I was right behind Vince. Speck got to the end of the hall, turned and ran back. When we got to the front desk, the two people working were hanging over the desk looking and laughing. When we finally caught him, Vince and I were cracking up wondering what everyone thought . . a little dachshund running down the all, then an old man running after him, and an old woman following along.

Once my parents came to see us in Kentucky. My first dachshund was a vicious dog and everyone was afraid of him. He didn’t care who you were . . friend or foe . . his first thought was to take a hunk out of your leg or hand. When my parents came to see us, I met them at the door and said Speck won’t bite but give him a minute to get to know you. I handed them each a piece of banana and showed them how to hold their hand out flat and let him get the banana out of their hand. My dad walked in held his hand out flat for Speck to eat the banana. I looked and my mom, who weighs about 90 pounds soaking wet, was up on top of the dining table . . still clutching her piece of banana. She said “I’m so scared of him! I” They finally got to be friends.

We will enjoy every day we have left with him, we’ll smile at the memories and we’re as ready as we can get for that day .. that’s coming soon.