Old Speck just keeps on kicking! He’s now 16-1/2 years old. He’s so fragile but sometimes he gets excited and acts like a puppy and Vince and just look at each other and say “where did that come from?” He gets so excited about eating and he’ll jump and run around. Switching vets helped his nasal/breathing issues. He’s been over a month without antibiotics. He takes heart meds twice a day. I once asked our vet how long dachshunds live and he said “It all depends on well they’re cared for” and I said “Oh good . . he’ll live to be 100” but I wasn’t serious. 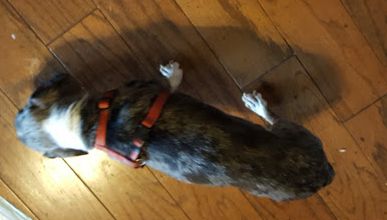 It’s so hard to get him to be still so I can get a picture. He was chomping on something and he was afraid I was going to try to get it he was almost still. He’s gotten so skinny. I feed him more than I ever have because we always struggled to keep him from being overweight.

It’s been months and months since he jumped on the furniture and I came in the house yesterday and he was in Vince’s chair. I looked at him and said “How did you get up there?” but, of course, he wasn’t talking.

He’s gotten so snippy recently. He bit me and I had to go to the doctor. He bit Vince and barely broke the skin. The other night I was taking him out and he was at the wrong side of the door (the side that doesn’t open) and I reached down to show him the right way and he snapped at me again.

Saturday we ran to town (Sunday too — you know Vince!). Vince went in Tractor Supply and I ran over to Big Lots for something. Vince came to meet me and he was so excited. A lady was in Tractor Supply with “the cutest dachshund” he had ever seen. For Vince to talk to a stranger, it must have been one special dog! She told him that she got her dog from her friend who lives in the next town from here and she will have more puppies some time in the spring. She gave Vince the lady’s number, we called and we’re on the list for a new puppy.

I think I said I’d never get another puppy. Rita about broke me from ever trying to house train a dog again. Speck has been the best dog about never having accidents in the house. I wouldn’t go so far as to say Rita would “hold it” if we weren’t here but now, she always tells us when she has to go out so we’ve come a very, very long way with her.

I told Vince last night . . if we get a new puppy in early summer and that one lives as long as Speck, you’ll be 80 when that dog is gone. Where has time gone? Speck is probably wondering the same thing.