From the time Vince and I met, I told him I wanted to some day live in a cabin in the woods on 40 acres. When my sister and I were kids, I always said I was going to move to my grandparents’ farm on 80 acres when I grew up and she said she was going to move to Houston. She didn’t . . and I didn’t. She lives not far from Lafayette, Louisiana and she’s pretty rural but not far from Baton Rouge, and New Orleans and she likes to shop. And .. you know where I live . . in the woods and you have to about hog tie me and drag me out of here to get me to go shopping.

In 2004 Vince and I went to Vermont and stayed in a cabin in the woods. The whole time we were there, I was saying “I wish we never had to leave”. Here’s what I wrote on the blog when we got back to a hotel with phone, internet and TV.

We stayed in a cabin in the woods with no telephone, no internet and no tv. After a few days of “romantic seclusion”, I was kinda looking for something to do. I began playing around with Electric Quilt (quilt design software) and decided to draw out the design in the bathroom floor. Then I decided to add other things that reminded me of the trip. This is the design that has evolved. The log cabin blocks in the center represent the log cabin where we were staying. The pinwheel design, which is the center of the floor tile design that was where I had first started my design. The trees represent the many trees in Vermont. It was very green. The brown snails trail blocks in the border . . I hope I don’t offend anyone from Vermont but I had never seen so many narrow, winding dirt roads!

I could have stayed there. Vince . . not so much back in 2004. Here we are now .. in not much more than a cabin in the woods. All we have for phones are cell phones which work about half the time here. Internet here has actually been pretty dependable and after 3 years of no TV, we have the AT&T Directv that comes through the internet. It’s not many channels but we do get a bitmore than we used to get. This part of Texas is not very green, though some parts of Texas are green. We have excellent roads in Texas but I still love this quilt design because it reminds me of of my dream to live in a cabin in the woods. 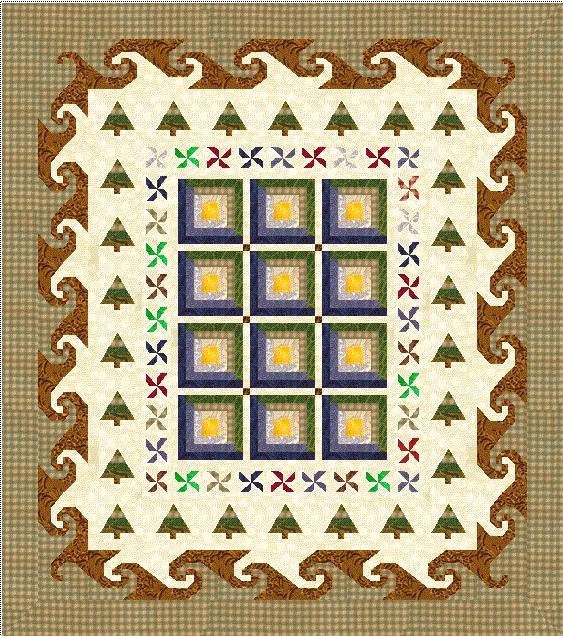 Cabin in the Woods Quilt

I would add another brown border before the wide checked border and I wouldn’t use checks because I don’t have any in my stash. I don’t have EQ on the laptop but I may try to re-draw this quilt and maybe make it .. maybe! I think it would be a happy quilt project.