Addie’s vest is about as finished as it’s going to get. Nicole is going to look for buttons in Joplin. I’m waiting for a furry pom pom that I ordered to come in and then if it matches well enough (for a 4 year old), I’ll add that. If not, I’ll send yarn and Nicole can make a pom pom for the hood. Nicole is an excellent pom pom maker. Mine never look right. 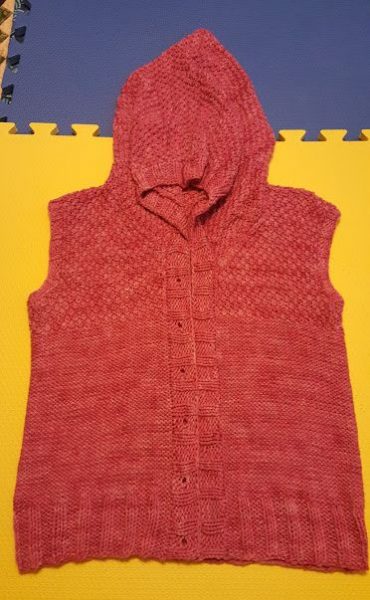 I thought about holding it til after the first of the year and showing it then so I could count the yarn for next year but that wouldn’t be very honest, would it?

The pattern is Bluejay and I enjoyed making it. The yarn is Blue Moon Fiber Arts Targhee Worsted. I love the yarn but I’m on the fence about it because it was supposed to be 250 grams per skein. The first skein was 223 grams, which would put it about 60 yards short. BMFA assured me the yardage was correct, though the weight was not but I ran out of yarn and I should not have. Knowing that the designers usually add about 10% for the required yardage and knowing what others used who made the same size, I’m betting I was about 75 yards short. That doesn’t make me real happy but . . it’s done and I like it and I think Addie will too.