That is apparently advice my dear husband has never learned!  🙂

Once when Vince gained a few pounds, he wrote the coach and told her that I held him down and forced brownies down his throat . . which I, of course, denied. Half the time when she sends out private emails asking us questions, he gives her some crazy response. He is definitely the class clown. The other night she asked if there was a song or phrase that we would use to describe our weight loss process and he wrote back “Do you Want Fries with That?” by Tim McGraw. Have you heard that song? If not, look it up. You will crack up thinking about Vince telling her that was his theme song. Where did that come from?

He’s always making up weird stuff and telling her that’s what he ate. One night he told her I made tiramisu. I don’t even like that and I doubt I would ever make it. I wrote her and told her not to believe anything he says! It’s all joking and she knows it. He’s now lost 40 pounds and she told him that so long as he’s losing that kind of weight, he can just keep eating all those crazy things he says he’s eating. 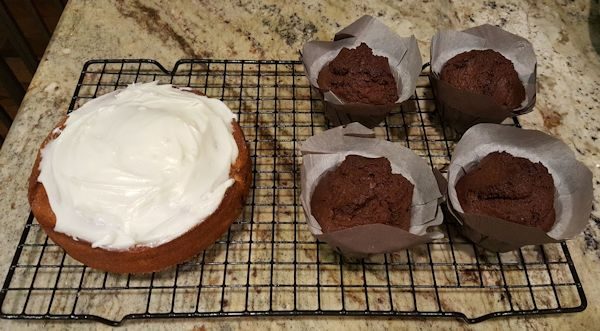 Last night . . he told her he had cake, brownies and Kahlua & cream . . which he did. I had the same thing except I didn’t eat a brownie muffin and you can bet I didn’t tell her I had any of that stuff. She wrote back something like “You’re so funny!”.

What do you think he did next?

He said “No! REALLY!” and sent her the link to my blog showing that I made a cake and brownie muffins. I told him . . you’ve done it now! One of two things will happen:

Then I get this from the coach:

You know your hubby has been telling on you and sending me links to your blog. 😉

The beauty of this plan, assuming your husband doesn’t go telling all your secrets, is that we can eat healthy, smaller portions and still have the occasional treats.

Men! You try to do something nice for them and see where it gets you?  🙂

Not only will I have to hide what I make from Vince but I won’t be able to write about it on the blog because he’ll find it and tell the authorities!  🙂