This project has already earned itself quite a story. First, it is socks and the pattern is Anemochory. This is another of those patterns for me that if I stop to try to think it out, my brain gets scrambled. Basically, it’s a sock. How different can that be? Leg, heel, foot! But it’s just different. It’s different enough that I almost talked myself out of doing it but there’s that attitude that “I can figure this out . . other people have made this sock and if they can do it . . so can I!”

The pattern is extremely well written and easy to follow . . just don’t try to rationalize the steps.

The first problem I ran into: 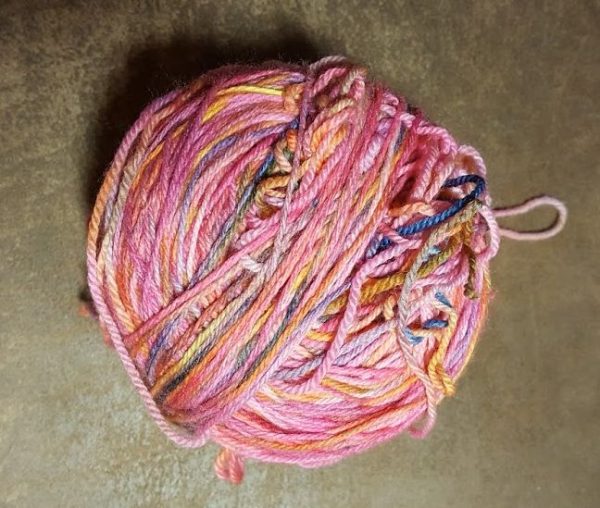 I really wanted to use this yarn. This is some of the very first yarn I ordered over 10 years ago and back then, I would wind it into balls as soon as it arrived and often, I didn’t keep the band so I have no idea what yarn this is but it’s pretty! I knew this pattern would work best with a solid and I convinced myself that there wasn’t enough color in there to mess with the knitting design but after about 20 rows of knitting, I just wasn’t seeing the pattern so I ripped it all back. 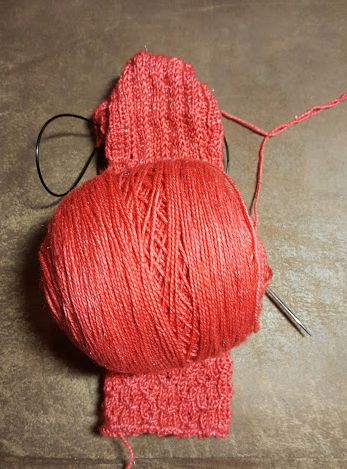 Next yarn was this sparkly yarn by Invictus. You can hardly see the sparkles in this picture but I thought . . this is kinda Christmasy so I’ll use it.

I never swatch for socks. I know the thinner yarns work well with 2.25 mm needles and the thicker sock yarns work well with 2.75 mm needles so I grabbed the 2.25 mm needles. By the time we were fixing to go to bed very late Friday night I had finished the leg and heel flap but when I looked at the pattern, it was so tight that it just wasn’t showing up at all. I thought . . too bad! I’ve made it this far; I am not turning back” but I couldn’t do it so I ripped it all back and by that time, Vince was already headed to bed so I went to bed and tossed and turned and squirmed and finally Vince said “Are you not sleepy?” and I said NO! I really want to stitch a few rows on that sock. He said . . go! So, I got up and knitted til about 2 a.m. using 2.50 mm needles. 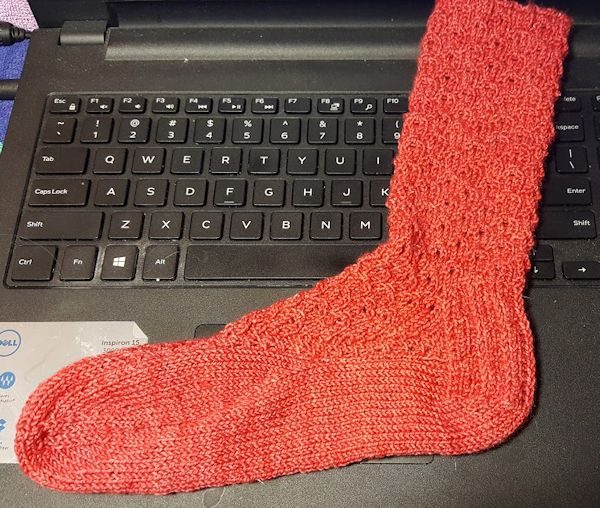 By the time I went to bed last night (early this morning actually), I had finished one sock. These were really fun to do. I’m hoping to get the second sock finished some time tomorrow and that will be the second Gift-a-Long project finished!

Of course, I will get better pictures once the second sock is done.