We recently ate at a friend’s house and she had made a big spinach salad and for dressing, she mixed up Greek yogurt with blueberries and a little honey. She also had a second container that was yogurt, raspberries and honey. It was so delicious. I had blueberries in the freezer so I came home and mixed up some for our salads. Then I thought .. figs! I have probably 20 gallon zipper bags full of figs in the freezer so I got some out and made the “dressing” with the figs. I had a pineapple that was ripe so I peeled it and used some of that to make pineapple dressing. Nothing is safe around here . . I love this stuff! 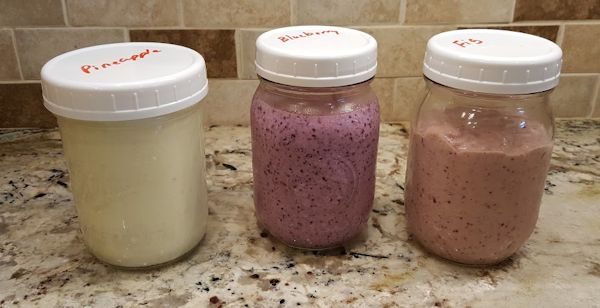 Even better .. when I’m wanting ice cream or something sweet, I’ve been taking about 1/2 cup of the “dressing”, putting it in a custard cup and sticking it in the freezer for half an hour or so. On the days I feel a bit indulgent (or weak), I’ll add a few of the dark chocolate chips to the mix.

The next time I’m using one as salad dressing, I think I’m going to throw some jalapeno pepper in the chopper and add to the dressing. The Noosa Mexican Chocolate yogurt that I love has cayenne pepper in it and I love that little bit of hot spice!

To make the dressing, I start with about 1-1/2 cups of Greek yogurt. It’s homemade yogurt that I’ve strained til it’s pretty thick. Add 1 cup of fruit. Blend with the immersion blender. Taste to see if sweetener is needed and if so, start with small amounts of honey til you achieve the desired taste.