When we first got Speck, we trained him to sleep in his crate. At night, every night for years and years, we would put his sheet in the dryer, get it warm, toss it in the crate and he couldn’t wait to get in there, curl up and sleep. I don’t know when or why he ever started sleeping with us but he did. Big mistake having a dog in the bed and one I won’t make again. Several years ago, when he got old enough that we figured he was too fragile to jump out of bed, we moved him to his own bed on the floor by the bed. We had never let him jump out of bed but if he heard something or we didn’t grab him quickly enough, there were times when he jumped out on his own and at 14 years old, being a dachshund, we didn’t want him doing that.

Along came Rita who had terrible bathroom manners and about the only way to keep her from wandering around during the night and doing whatever she felt like doing, was to keep her in the big bed. She really freaks out in a crate and if my house was a little bigger and I had a place for another crate, I would work to get her crate trained but for now, we don’t have room for a crate for her. She didn’t really sleep on the bed but she had her little bed that sat on top of the quilts and she slept in her bed on the big bed.

Old Speck gets up and wanders around during the night. In the dark, he bumps into things and gets confused and I have to get up, turn on the lamp, help him find his way back to bed. That happened usually 2 or 3 times a night. Rita seems to have caught on to the game I play with Mother Nature where whoever gets up first wins and Rita thinks she has to beat me up, which meant sometimes we’d be awake at 4:30 a.m. and Rita wanted to get up. 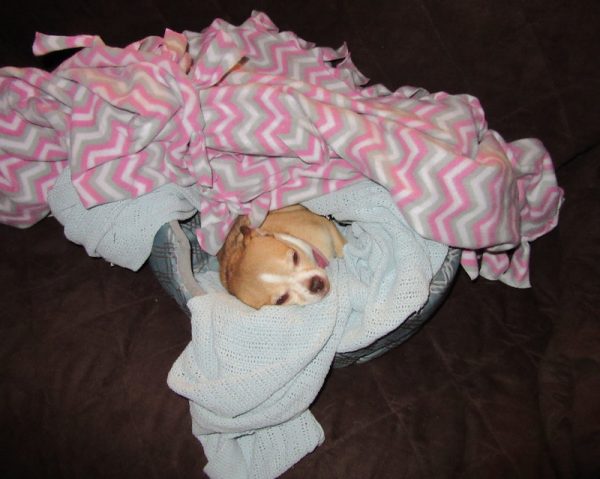 A couple of weeks ago, I had enough of dogs in the bedroom. I wasn’t quite sure how it would go but, since I’m always the last one to go to bed, I just shut all the doors to the bathrooms and bedrooms, and I went to bed with Rita on her little bed on the sofa and Speck on his big comfy bed on the floor. By the way, his nasal issues returned even without him using his Serta bed so it wasn’t the bed and he’s now back to sleeping on it. 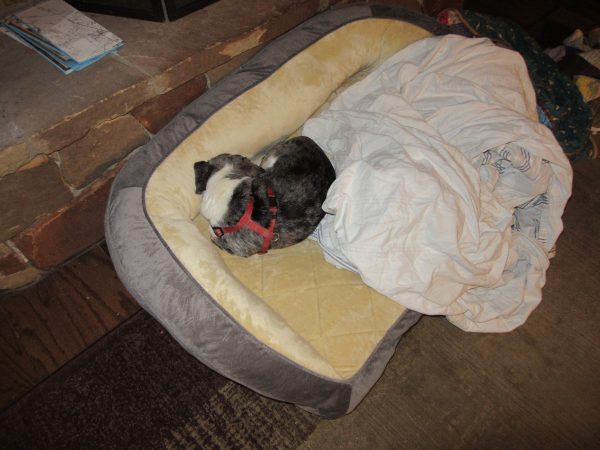 Nobody complained. I leave the light on the stove vent on so they can see. There’s no carpet but Rita hasn’t had any accidents in months. If Speck gets up, he finds his own way back to bed. The best news . . I’m back to getting a full night’s sleep without being interrupted by dogs!

No more dogs in the human beds . . ever.