Nicole’s parents have this dog that may or may not be their dog but he’s kinda dachshund looking and he hurt his back recently and couldn’t walk. He stayed at the vet for a while and then he came home with some meds but he took the last of the meds some time last week and he still couldn’t walk .. he would just drag his back end. They didn’t want to have him put to sleep so they were looking into getting one of the doggie wheelchairs.

Nicole was going to stay at her parents’ for a few days and they were going to meet in town for lunch but she had Speck so she went out to their house to drop Speck off and she said Max came running out to meet them. When she got to the restaurant, she said to her parents “Max was running!” They said .. sure . . right . . and didn’t believe her. She was saying “Really! He ran out to meet us!  You’ll see when you get home.”

Totally unrelated but somewhat similar story .. last Friday I was washing and drying clothes. Took the last load out of the dryer, closed the door and the dryer kept running. I hit cancel, reset . . everything I could think of. I couldn’t reach the electric plug to unplug it so I flipped the breaker. Nothing helped. As soon as you closed the door, the dryer came on. 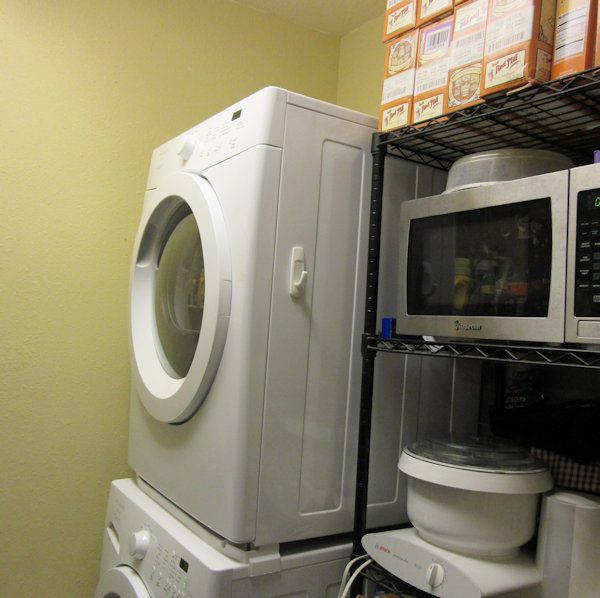 Yes, my microwave is in the laundry room. I don’t use it and if I had my way, we wouldn’t have one but Vince likes having it.

Vince got home and I told him about it. He read online – maybe lint was caught up somewhere and screwing it up. He took the whole lint gizmo apart and vacuumed down in there. He was able to punch several buttons at the same time and got an error code. The appliance store charges $100 just to come out here so by the time they came out here, saw what was wrong, got the parts and came back, I’m sure we’d be looking at about a $400 minimum bill. We just bought this dryer in December, 2012 so while it isn’t new, I expect things to last a bit longer than that.

When we move, I’m not taking this set with me. I don’t like the front load washer at all and here, that’s all I have room for. We still have the small stack washer/dryer that were in the house when we bought the place. The washer had a leak and it was going to be about $400 to fix it so that’s when we bought the new set. And, I still have my washer/dryer in the shop that we used in MO and it wasn’t very old when we brought it here, and I have a clothes line so I wasn’t real fired up about spending $400 to fix the dryer.  I can still use it – but when not in use, I just have to leave the door open and the light’s on.

Vince got online, put in the error code, found the part, which was just a little over $100 and ordered it. The part isn’t here yet.

Yesterday, I figured I’d better get all the laundry done before Vince disassembled the dryer and probably blocked the washer so I couldn’t get to it either. I set the timer on the stove so I could get the clothes out after 20 minutes. I was doing something and it was probably half an hour before I went in to get the clothes and the dryer was off. Hmmm . . that was kinda weird. Nice but weird. I got the clothes out, closed the door and the dryer didn’t come back on. I put in the next load, it dried, timer on the dryer went off, dryer turned itself off and seems to be working fine.

If we’re leaving for an extended time, I’ll just flip the breaker. I’m not sure I’ll trust it again even if Vince changes the part because who knows if that’s really the part that was bad. Weird that it fixed itself. Tomorrow it may be broken again but for now, I’m enjoying having a dryer that will turn itself off when it’s supposed to.