If I find a good deal, I’ll stock up .. remember the cans of lychee I found at Aldi? But I’m not going to spend hours and hours looking for the lowest price on something. It’s a hobby for Vince and I don’t mind him doing it so long as he doesn’t buy 24 coffee pots just because he thinks he found a great deal. I’m going to use all those cans of lychee . . eventually. Seriously, on a hot day after working out in the garden, ice cold lychee is almost as good as ice cold watermelon.

Last week, the same day my soil report came in from A&M, I went down to the local ag store, report in hand. Thankfully, a guy, maybe the owner, was in there and he knew what he was talking about. One of the things he suggested was chelated liquid iron, which has already made a huge difference in the way the okra looks. 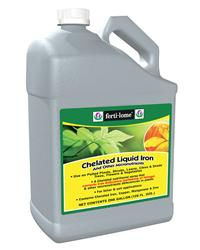 Vince said “We could have ordered it for less!” and I explained that if I were buying a truck load, yes, I would have looked for cheaper but one thing I appreciate is their knowledge. They help me out when I need something for the chickens, or the garden, or bugs and it’s one of the ladies who works in there who takes care of the chickens and cats when we’re away so I am happy to support that business.

I bought a gallon of the liquid iron and it was $17.49. That was on Monday and by Wednesday, I had used it all and only a few of the fruit trees had been sprayed. Saturday Vince and I were headed to town and I said “Can we stop by the ag store and get more iron?” Grumble, grumble . . it costs less if you order it online! Well, I need it now, so we stopped.We didn’t quite experience the knowledge that I’m willing to pay extra for because it was just young guys working in there. There were no more gallons on the shelf. I knew right where it had been just a couple of days ago. They guy working said “We don’t carry it in gallons.” Hmm .. I just bought a gallon two days ago. He looked at the other guy and said “We’ve never had it in gallons.” So now, Vince is telling me (1) I pay too much for stuff buying it there and (2) I don’t know what I’m talking about. I was so sure I had bought a gallon of that stuff but we ended up with a quart for $7.99. Darn! That made that gallon for $17.49 pretty cheap!

I came home and went straight to the trash can in the garden. Yep! One gallon empty jug! Went to my car and found the receipt. I showed it to Vince. He said “We’ll find it online for less if you’re going to be using a lot of it.”

Well, we couldn’t find it for less. There was one place that had it for a few pennies less than $17 but shipping was right at $15 for one or $54 if I ordered 8 gallons. Most places were closer to $20/gallon. I felt vindicated and even if they had been just a few $$ less online, I would still buy locally because I think that’s right. I never mind ordering things when I either can’t get them locally or the only place I can find them is Walmart. While they do provide jobs for lots of people (including one family very close to me!), I spend enough with them that I don’t feel bad ordering online instead of going there.

Think about it – yarn, spinning wheels, knitting needles -those are my big purchases and I can’t get that locally.

Vince was going to town today and I asked him if he would stop by the ag place and see if they would order more liquid iron and be sure the price was still in the $17 range. I was thinking maybe they had that stuff sitting around for a long time and the price might no longer be $17.49. Even if it wasn’t, I just wanted to know before ordering.

After lunch, I got this email from Vince:

What’s her name was there and she ordered us a case at $17 something a gal.  Will be there tomorrow.

That tells me he doesn’t have a clue what the lady’s name is that takes care of the place when we’re gone!  I think it’s funny. She’s so good about remembering names and I’m betting Vince still has names running through his head trying to remember her name. She was the vet tech at the first vet we used here and I loved her when she worked with Speck.

Funny how 10 days ago, I never though anything about chelated iron liquid and now it’s something else that I have to have!