First, you can google “Cucumber Spread” and find all kinds of variations of this recipe. Mine is in my head so there are no measurements but this is something we keep around here almost all summer – from the time the cucumbers start producing, til they’re done. It’s great for when you find those cucumbers on the vine that you missed and now they’re too big to eat. Just cut away the seedy part and use the rest. 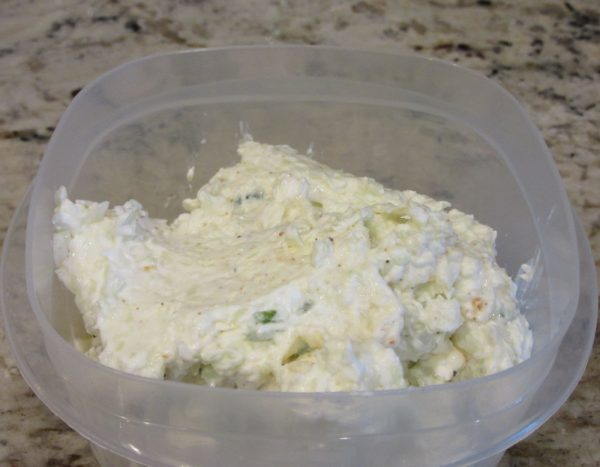 I love it with crackers, with Melba toast, with homemade,  fresh white bread and I love it stuffed into an avocado. Last night after telling Vince about my friend loving it, he said “let me try some again” and now he loves it. He is so sure he never said he didn’t like it .. maybe he did, maybe he didn’t. Maybe I just convinced myself that he wouldn’t like it so I wouldn’t have to share it with him. 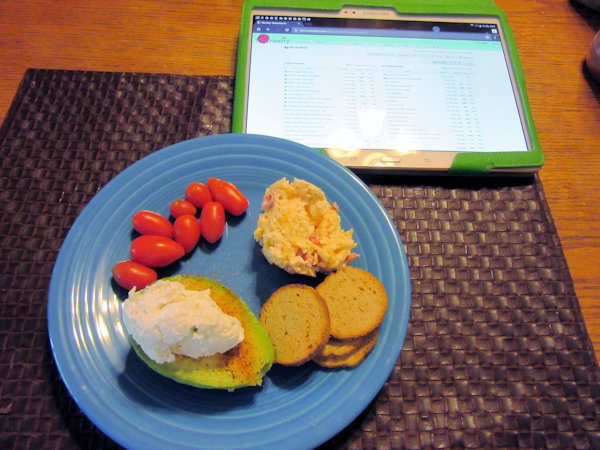 My lunch today was an avocado (with a little Slap Ya Mama .. I love that stuff!) stuffed with cucumber spread, a little pimento and cheese, melba toast and tomatoes. It would have beennice and healthy had I left off the cobbler!  🙂

One of the things that I use in my kitchen so often, that I never thought I wanted til I saw how much Chad uses his, is a little mini Ninja chopper. I love that thing and that’s what I use for making cucumber spread.

I feel weird even writing this because there’s just nothing to making it.

Start with an 8 oz. package of cream cheese (I use the full fat version and I use store brands), leave it on the counter for a while til it’s soft. Use 2 good sized cucumbers or one that was hiding in the vines and now looks like a small watermelon . . peel it and cut out the seedy part. You can grate it or cut it into big chunks and put it in the little Ninja chopper. Using several layers of paper towels, spread out the grated cucumber to remove some of the excess juice.

I put about 1/4 of one small onion in the chopper and chop it up real fine. I usually use 1 or 2 jalapeno peppers but I chop them by hand (don’t ask me why).

Mix the onion, cucumber and jalapeno with the cream cheese. I just use a spoon. Add a little mayo to get it to a bit more spreadable consistency but there’s probably more liquid in the cucumber that’s going to be released so you want to leave it a little bit on the dry side. You could use sour cream or yogurt instead of mayo.

Once it’s all mixed up, I add a little Slap Ya Mama cajun seasoning but you could add salt, pepper, garlic powder, paprika, lemon pepper, even a bit of dry Ranch dressing mix – add in anything you like. If you’ve added all the mayo you want to add and still need it to be a little more spreadable, add a spoonful or two of Half & Half or milk.

A lot of recipes call for a drop or two of green food coloring but . . what’s the point? I never use that.