I’ll kinda start from the beginning with Speck’s ordeal. Remember that he just turned 16 and I’m not being overly optimistic but I am hopeful.

Speck has been on and off antibiotics for about 9 months. He had the sniffles and he would sneeze and do that reverse sneeze thing where it sounded like he was dying. Probably in December, with the vet’s permission, I began giving him a whole Benadryl in the morning and a whole one at night and that helped for a while. When I came back from MO in March, he ran out to meet me and he sneezed and this is gross but there was probably 1/4 cup of green ‘stuff’ that came out of his nose.

Back to the vet and more antibiotics. For the past 2 months, he’s been taking Cipro AND Clavamox. He will take it for 14 days and seem to be good, but within 4 or 5 days of being off it, he’s back to sneezing, wheezing and snorting.

The vet detected a heart murmur and did x-rays to see if there was any enlarging or whatever he was looking for and he said it was all very minor and should not be causing the recurring problems. While Speck was there for the x-ray, he was trying to bite so they put a muzzle on him and he was slinging his head trying to get the muzzle off and they saw lots of the green ‘stuff’ so the vet knew I wasn’t exaggerating.

Even though I wasn’t going to spend the money to get his teeth cleaned again, I went ahead and did that just in case he had a badly infected tooth that was causing the ongoing sinus issues. Nope, teeth weren’t bad.

The vet said Speck might have a tumor in the nasal area and it was causing enough restriction that infections were developing. The only way to know for sure was to take him to Dallas and it’s very expensive for an MRI and we said no . . not for a 16 year old dog.

I kept trying to think if there was anything we had done that could be causing an allergic reaction. Anything we were spraying in the yard? Any rug cleaner? Laundry detergent? Candles? Food? I remembered his bed. 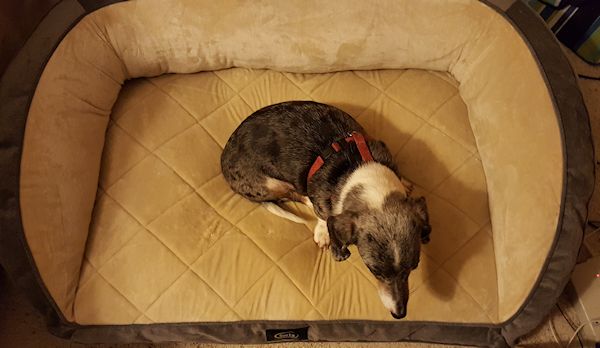 Last July, we bought Speck a nice, new bed. I knew his bones were old and probably achy (I know how I feel!) and figured a good bed would be nice.

Monday night I took the new bed away and put the old pill back for him to sleep on and by Wednesday, he was not sneezing, snorting or wheezing! He’s been off antibiotics now for 5 days but he was still sneezing when he was taking the antibiotics.

I am hopeful that I’m right and there was something in that bed that was causing an allergic reaction. The next few weeks will tell but I don’t think he sneezed once yesterday. We spent a whole lot of money and I cried a lot of tears over my sick fur baby so I am optimistic but, as I said, he’s 16 so each good day we have with him, I will be thankful!