Or, maybe it’s TV and no TV.  The background is that I detest TV. I feel like sitting and being entertained is a waste of time. I understand that are some good, educational shows but when the TV is on non-stop, it’s easy to dislike it enough to not want any part of it. It’s ok if the TV is on and I can sit and knit or read or “do” something but then I keep asking questions because I’m not paying attention and that never ends well. Vince would walk in the door at lunch, turn the TV on. He’d leave to go back to work and I’d turn it off. Vince would walk in the door after work, turn the TV on. He’d go to bed and I’d turn it off. It was never off when he was home. About 3-1/2 years ago, I convinced him that there’s life outside TV and we turned off Dish Network as a “trial”. It’s still off but I promise you if I disappeared tomorrow, the very first thing Vince would do is have cable turned back on. If he disappeared tomorrow, I’d never ever miss the TV. We do have Netflix, Roku, Kodi, Raspberry Pie and I have no idea what else but he manages to find plenty to watch but the TV isn’t on non-stop.

Even when we did have satellite or cable, I’ve always been totally against a TV in the bedroom and so far, he’s always agreed, though I know he’d prefer to have a TV in every room!

We’ve been looking at houses . . don’t read anything into that statement . . it’s more ME looking at houses. Yesterday I found a new listing that I really like. I told Vince . . I found a house in the area we’ve been talking about and I like everything I can see about it. Do you want to look at the pictures? Sure. 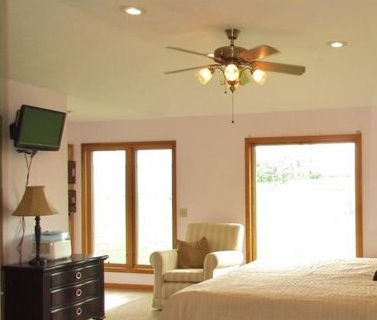 TV in the Bedroom

I began showing him the pictures and telling him everything I loved about each picture.

Me:  Look at the view! It backs up to the National Forest and has more land than we have here so we’d probably never see anyone else.
Vince:  Look . . it has two satellite dishes on the roof!
Me: I love this little nook where you could put your coffee pot and be out of my way.
Vince: (nothing)
Me: I love the stove! It’s centrally located but not in the way.
Vince: (nothing)
Me:  Vince, are you looking at the pictures? (Because the vent is the type that goes down and comes up and it looks like there’s not a vent and I expected him to say “there’s no vent” and he didn’t).
Vince: Yes, I’m looking.
Me:  Look at the barn! Wouldn’t it be neat to have a barn that size?
Vince (nothing)
Me: Look at all the windows in the master bedroom!
Vince: THERE’S A TV!!

Briefly, I wanted to say . . if you buy this place, I’ll agree to a TV in every room and then I came to my senses. We say crazy things when we’re desperate!

Honestly, the only two things he took away from seeing almost 40 pictures of this house were (1) there were two satellites receivers on the room and (2) there’s a TV in the master bedroom!

I did send a picture of the cabinets where the stove is located to my favorite cabinet maker (who is also my daughter-in-law’s dad!) to see how hard it would be to take out one little section of one cabinet and put in a 6 burner stove instead of the standard stove.

Time will tell if the two satellite dishes and a tv in the master bedroom will be enough to convince my husband that we should seriously look at this place.