First, let me stress that I am not a coffee drinker. I’ve always loved the smell of it; hated the taste. At least once a year for the past 40 or so years, I’ve thought . . I have to like this stuff! I would fix myself a cup, add lots of sugar and lots of cream and end up with something that resembled coffee milk and . . nope . . don’t like it all; and furthermore . . can’t figure out why anyone would like it.

There are times, especially driving back and forth to Missouri, when I’ll think . . coffee would be good. I need a boost. I’d stop and get an iced coffee at McDonald’s or Starbucks and as soon as I tasted it, I’d say . . why did I do this? Nothing wrong with their products . . I just didn’t like it.

But, the concept of iced coffee intrigues me. Coffee smells so good . . there has to be a way to like it and iced coffee seemed like it just had to work some how.

As I read the reviews at Amazon for the Toddy Cold Brew System, I kept reading folks writing that it made such “smooth” coffee. I wasn’t even sure what that meant.

Yesterday afternoon I put the water in the grounds and left them almost 24 hours. Last night was time to drain the pot and taste the product. 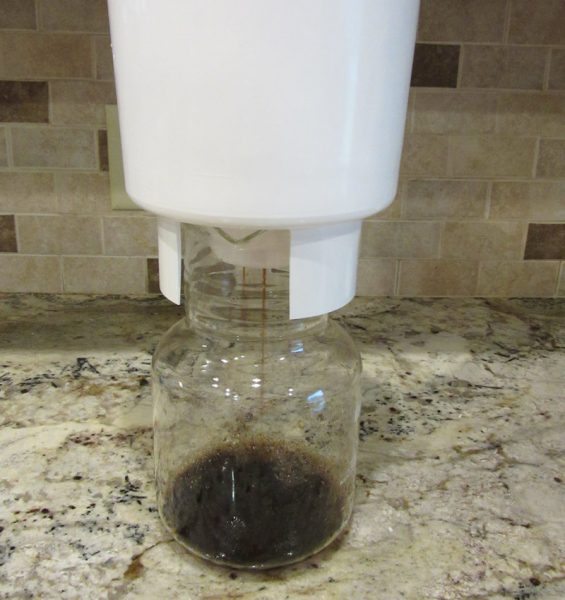 Ease of Use:  It’s super easy. I can’t imagine anyone thinking it’s hard or not handy to use. It does take a long time to drain. It’s a little more than a slow drip but it’s quite easy to sit the brewer over a cup or jar to get what you want and then stick it back over the carafe and let it finish . . just go about your business and come back later. There was no mess . . maybe a few drips because I moved it off the carafe and over a jar to fix my iced coffee, and then over a measuring cup to fix Vince a cup of coffee. 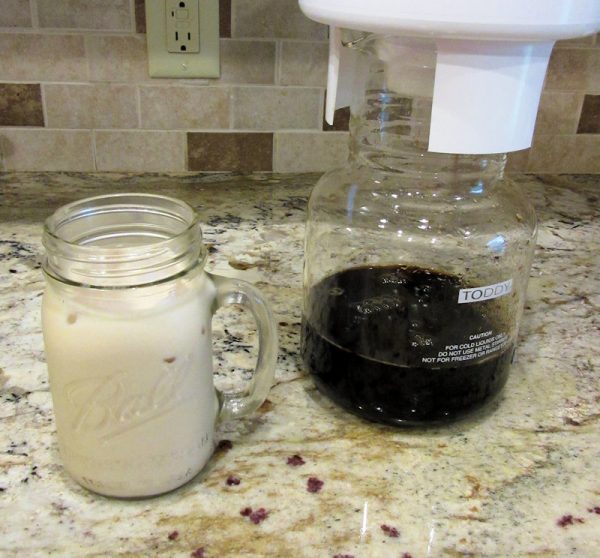 Taste:  This is what I’ve been knowing I wanted . . even though I had never had it. I now know what “smooth” means. I told a friend last night . . it tastes like a milk shake made with coffee flavored ice cream. This is no “hardness” or bite to it. Again, remember . . I am reviewing a drink that I do not like. A coffee connoisseur would definitely have a totally different opinion.

Speaking of coffee connoisseur, Vince loves coffee. He tasted it and the first thing he said is “There’s no bitterness”. As I mentioned last night, cold brew is supposed to have way less acid than hot brew. 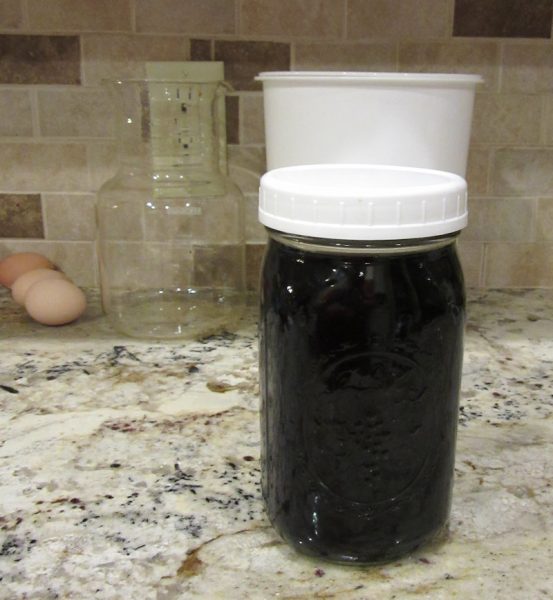 Cost:  Here’s where Vince ran into a problem (other than the fact that he’s a hard nosed “brew it in a coffee pot” kind of guy). The coffee that I used is the Community King Cake coffee. I think we paid about $5 for a 12 oz. bag when it was on sale. Accounting for what I used for my iced coffee and Vince’s cup of coffee, I got about 5-1/2 cups of concentrate. The reviews suggested running a second tank of water over the same grounds. I’m doing that tonight and I’m figuring that may result in the equivalent of half of what I got the first time (we may have to use more of it to get the same result). So, let’s say I get 8 cups of concentrate from one 12 oz. bag of coffee.

Vince drinks very strong coffee and I think he is going to like his coffee made with a little less than half as much concentrate as water. Last night I used 1/3 cup concentrate to 3/4 cup of water and he thought it wasn’t strong enough (again . . his way is better than my way so no matter what he thought, he likes his way best . . he’s a man!) So let’s say for each cup of coffee, I use 1/2 cup concentrate. That means 16 cups of coffee from a batch of concentrate. He tells me that he gets 25 cups of regular coffee from one 12 oz. bag. I don’t know if that’s right or not . . I see all kinds of numbers on the internet. Assuming he is right (and if you ask him, of course he is!), then making coffee with the Toddy is more expensive. But honestly, how much is a good, smooth tasting cup of coffee with less acid worth? He and I have very different opinions on value!

For my iced coffee, I used a bit less than 1/2 cup of concentrate, 1-1/2 cups of whole milk, 1/2 cup of Half & Half and a bit of sweetened condensed milk (hey . . it has less sugar than Dr. Pepper!)  but we’re definitely not talking low-cal, low fat, low sugar here.

So, my yummy iced coffee costs me about 65¢ for that big old Mason jar full! Vince pointed out that Dr. Pepper costs less! Grrrr!

One last thing I read and don’t know if it’s true is that when you brew a second batch from the same grounds, most of the caffeine has already been removed so that second batch of concentrate will be lower in caffeine. Caffeine doesn’t seem to bother me . . I think I stay up til I’m about to drop anyway but I’ve drank Dr. Pepper right before going to bed and it’s never kept me awake. But I might keep the concentrate from the second brew in a separate jar and use that for any evening iced coffees.

And, I’m betting eventually Vince comes around and wants to use “my” coffee!

Any questions? Just leave a comment and I’ll do my best to answer.