Over the weekend, or was it Monday? I can’t remember  . . but we watched one of those shows where the guy goes around to different places and watches them make food and they were in the Austin/San Antonio area and that BBQ made me want to fire up the grill right then.e I told Vince . . let’s get in the car right now and go buy a pork butt. We didn’t. Neither of us does well driving at night. We wouldn’t have gone if it had been the middle of the day but I haven’t stopped thinking about that pork butt.

Yesterday I took one out of the freezer and stuck it in the fridge to defrost. About an hour later, Vince came home with one. He had gone by the store and bought one. Good Vince! 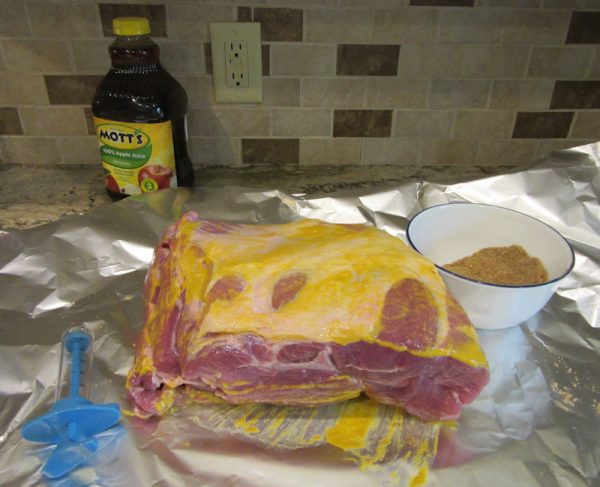 I always rub mine down with mustard first. The guy in the show injected his with apple juice so I’m trying that. 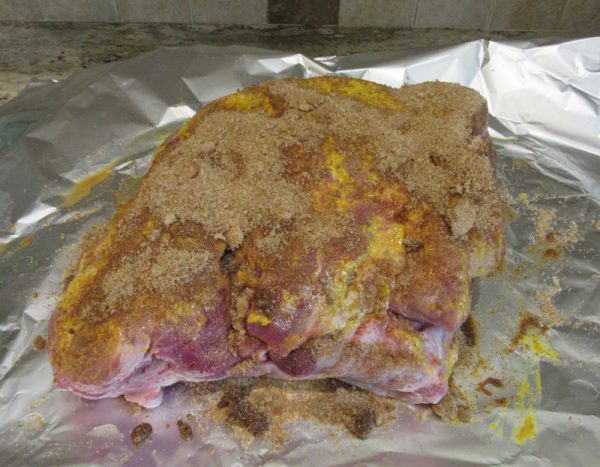 Then I rubbed it down, wrapped it in foil and will smoke it in a couple of days. Another thing they did on TV was cooked it til the internal temp was 140º, then wrapped it in foil, stuck in in a 225º oven and left it overnight. I couldn’t remember at what internal temp the guy pulled it from the smoker so when I was looking for it on the internet, I found this site where the guy kinda did the same thing, but he left it in the oven to cool down so . . I’m going to put it on the smoker on Thursday morning, let it smoke most of the day. It’s almost 10 pounds so it if I put it on around 10 or 11 a.m., it probably won’t reach 140º til late in the afternoon or early evening.  Then I can stick it in the oven overnight, let it cook til about 8 a.m., then let it sit in the oven and cool down a bit til lunch time at 11.

With trying to get a lot of knitting done, I can serve pulled pork in a different way for at least a wek:

Look at some of these ways! I’m glad we have another one in the freezer because I think I’m going to need more than one to make all the things I want to make.

Of course, I’ll let you know how it goes keeping the butt in the oven overnight. Maybe I should check the propane gauge before I go to bed and after I get up to make sure it’s worth it. That’s a long time to run the oven but on 225º, it shouldn’t matter too much. I’m thinking if the butt wasn’t so big (the pork . . not my own!), I could probably stick it in the slow cooker or I could even put the big one in the Nesco roaster but . . I pay for electricity at night so . . pay for propane or pay for electricity  . . choose your poison!