In November I dug up all the yacon  .. or I thought I dug it all up. The crowns were divided and saved in pin shavings to replant this year but they all shriveled up, rotted and smelled horrible so we dumped them. You can read about the parts I harvested and the parts I saved to eat in this blog post. There’s a link in that blog post where you can learn more about yacon. It’s a very interesting plant.

They’re hard to find and they’re expensive so I figured my yacon growing days were over. The other day I noticed . . they’re coming up from where I thought I had dug them all up! A couple of days later Vince had been out tilling up where I’m going to plant my okra. He said “I cut some of the grass in the garden.” I asked him to come let me show him where the yacon were coming back up so he wouldn’t cut that area. Too late, Ethel! He had already cut it. He has a real talent for cutting down the things I want to save but I hadn’t told him about it so I couldn’t complain. So now my yacon growing days were really over.

Til I went out there to see about planting something else and there were the yacon up again. I decided to dig them up and transplant them to the empty raised bed. Well, it’s empty except for a few things that are coming up that I think are going to be sunflowers! I left those and planted the yacon around them. 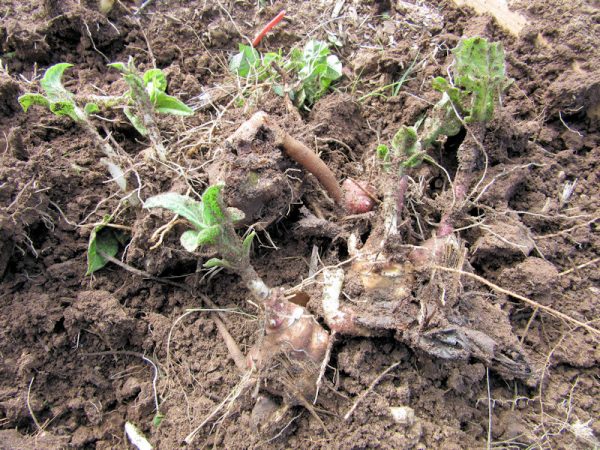 There are probably six clumps of yacon in the garden. In the picture, you see half of one clump! From two clumps, I got enough tubers to plant the entire 8′ x 8′ raised bed and planted about 20 more plants around two sides of the bed. I left the other yacon growing where it was and will clean out around the plants, mulch them and hopefully they will not get mowed down again. 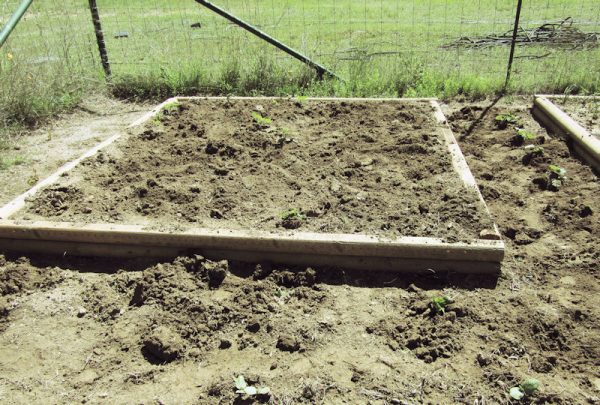 This morning I got four – 30′ rows of okra planted, and some jack-o-lantern pumpkins planted. I think the only thing I have to do in the garden still is to plant more squash, transplant the tomatoes that are in buckets that were in the greenhouse, and transplant the artichoke seedlings after they grow a bit stronger.

Vnce is going to dig up along one fence line, inside the fence, and I’ll plant 4 elder berries, 4 goji berries, 2 Hanson bush cherries and 1 gooseberry. I don’t have a lot of hope for the gooseberry. I don’t think it will like our Texas heat and while I understand that it probably will never produce, I at least wanted to try.