A trip to town could not be avoided any longer. I put off leaving the house til I can no longer talk myself out of leaving and today was the day I HAD to go to town. We were out of several things . . oh, heck . . the truth is . . Vince doesn’t like Schlotzsky’s and I love it and he wasn’t coming home for lunch today so treated myself to Schlotzsky’s. Really, Schlotzsky’s treated me because I had earned whatever  you get and I only had to pay 73¢ for my sandwich, chips and Dr. Pepper!

I stopped by Aldi just to get almonds. I usually have plenty of them but had run out and was trying to decide if I was going to get more now or wait til cooler weather because of shipping them in this heat but . . I needed them. I was thinking I wouldn’t even get a cart and then I’d grab my almonds and be on my way but then I said . . You know how you are! Get a cart!

Oh, my goodness . . did I get some deals today. I love Aldi for their regular prices but when I happen upon markdowns like I did today . . I just want to bring my knitting bag and find a corner and stay there forever! 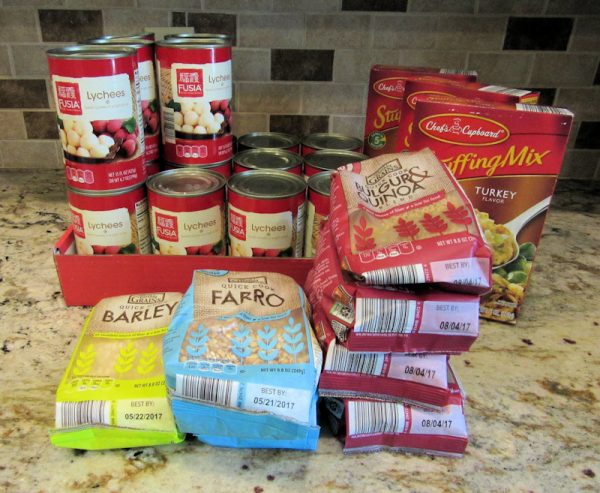 The first thing I saw was the canned Lychee fruit marked down. We will drive 2 hours to an HEB to get this and pay $1.89/can for it. I had never seen it at Aldi and would have been happy to pay their full price for it but for 49¢ a can, it all came home with me – 17 cans! 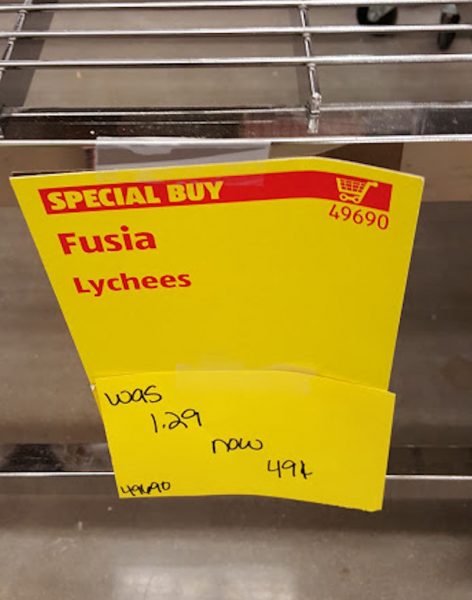 Notice that shelf is now empty!

The ancient grains . . I’ve plenty of those little bags for full price. Love them all. I probably should have bought more of that at 99¢ a bag. 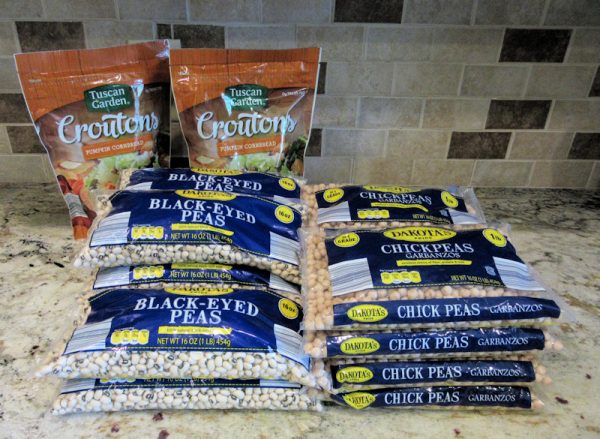 The croutons are pumpkin/cornbread and they were on sale for 25¢ per bag. The peas were on sale for 69¢ per bag. One pound of dry garbanzo beans or black eyed peas for 69¢! That’s a price I don’t see around here any more. They also had light red kidney beans which I like but Vince doesn’t like so I didn’t get those. 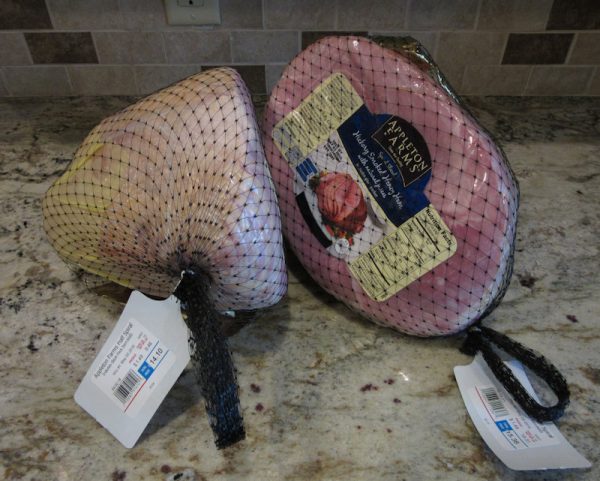 The hams were half price! They had bone in, boneless, ham steaks — all half price. I only bought two of them but one is about 9-1/2 pounds and it was $7.05. The other is almost 10-1/2 pounds for $7.68. Do you know how many meals I can get from a 10 pound ham? Breakfast, sandwiches (sliced ham, ham salad) for lunch, baked ham, ham with scalloped potatoes .. there are so many quick and easy things I can do with ham. Then there’s the bone! Beans or soup . . yum!  I should keep track but I’m betting I can get 15 meals out of a 10 pound ham. Of course, other things will go in there but for the meat, it will not cost over $1 per meal.

I didn’t need milk but they have milk now for 99¢ per gallon. Other stores in town have it on sale for 99¢ per half gallon. What a deal for those of us who drink and use lots of milk.

Having an Aldi here definitely cuts down on the grocery budget. Some trips end up costing more than I had planned but in the long run, Aldi saves this household a lot of grocery dollars.