I’ve mentioned it on here before but I don’t really believe in coincidences. I believe everything happens for a reason and probably too often, I’m looking for the “reason”. I rarely just brush something off as a coincidence but am always thinking about an underlying reason or a message the coincidence might have been intended to communicate.

Last week I mentioned about my ongoing daily search for the perfect place in Missouri. I keep thinking I’ll find a place that Vince will love and then he’ll be excited about moving back there. As of yet, he is not excited and has no plans to move back. I wouldn’t mind being anywhere in SW Missouri. I have no real desire to be in the same town with Chad, mainly because I doubt they stay there. But, if were within 100 miles of Nicole’s parents, then when Chad and Nicole come “home” for holidays and vacations, we’ll all be right in the same vicinity.

Last week, a new listing popped up in Noel, MO. We both liked it. The price was good but almost all real estate in that area seems reasonable compared to real estate costs around here. It had all the requirements except a gas stove – a well, a fireplace, a safe room, a shop, and from what I could tell from the pictures, there were no close neighbors. Vince said it would be pretty easy to install a gas line and switch over to a gas stove. We talked about it, we contacted the realtor, but then we decided it wasn’t the place for us for several reasons.

We’ve still been talking about it though so we probably haven’t completely ruled it out.

Several months ago, I had found the box that had pictures to hang on the walls here. We’ve only been here 4 years . . it’s about time we hung a few things on the walls, don’t you think? A couple of things had been hung but there are still some things to be hung. There were a couple of pictures that I wasn’t going to hang here and they were standing in the hallway, leaning against the wall. Last night I ran into them, knocked them over, broke the glass in two of them so I cleaned up the mess, and had the frames leaning against the wall on the front porch. 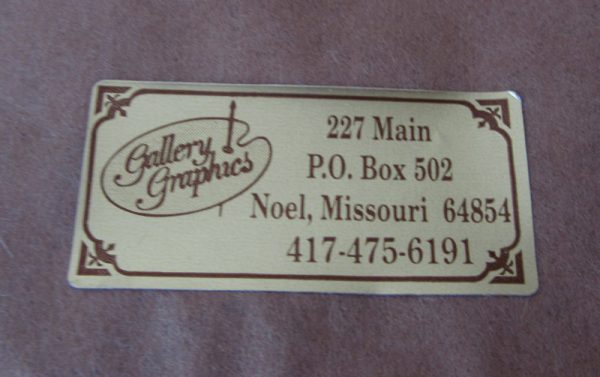 How weird that this 25 year old print came from Noel, MO .. where that house is that we keep talking about! I googled it and apparently the shop was started in someone’s home as a frame shop and they did a lot of wholesale framing and selling to gift shops. They worked out of their home and later moved to downtown Noel. Apparently the owner has passed away, the business may have been closed for a while, someone else has opened the business under a new name and moved it to Fort Scott, KS.

I just thought it was so weird that we’ve never really talked about Noel, MO til the past week and we’ve researched and done map searches and all kinds of searches and then .. that print that has been a part of my life for so long was framed right there in Noel.

Do I think all this means anything? No . . not really. I just think it’s funny. It’s just a little tidbit of worthless “happening” that I’ll file away . . it made me smile and gave us another topic of discussion about Noel, MO.