One of my treasures from Lake Charles, LA is my Pirate’s Pantry cookbook.  The book is a collection of recipes put together by the Lake Charles Junior League and their second books Marshes to Mansions and even though it has been out for years, I had never purchased it. Before Christmas, I ordered a copy for Chad and me. I remembered to bring it to him this trip, along with a BBQ book and Nicole’s cheesemaking book. 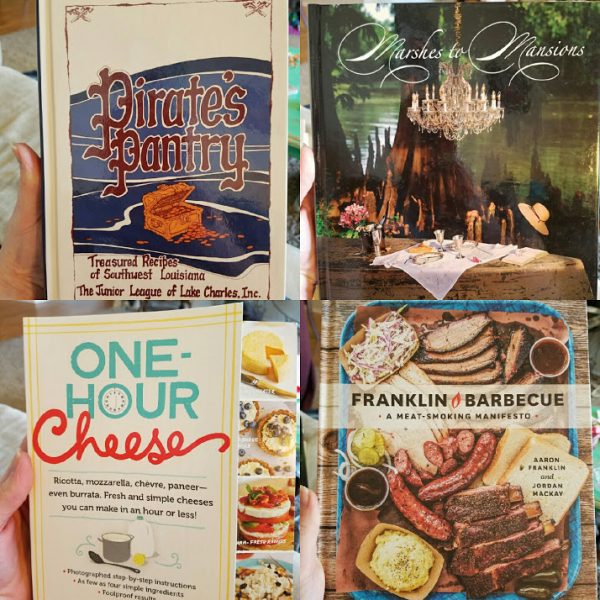 Chad went through the Marshes to Mansions book and then said “I wish I had the original Pirate’s Pantry book”. I thought he had that one but he didn’t so we ordered it and it arrived today.

There are recipes in there that I’ve made over and over since getting my very first Pirate’s Pantry in 1976. In fact, in about 1990, my book was so worn than I bought myself a new copy. Buttermilk Pie (recipe of the wife of the attorney I was working for when the book was published), Allen’s Golden Biscuits (the second attorney I worked with for 11 years) and Blend of the Bayou Casserole which is absolutely wonderful and I haven’t made so much since I no longer get good fresh shrimp or crab meat. When Nicole posted this picture on Facebook, Sarah, my friend since first grade, reminded us to try Sybil’s Shrimp Fritters. I don’t know how I forgot those because I used to make them at least once a week. They’re so easy and so good. Chad has shrimp so tomorrow night we’re having Shrimp Fritters for dinner.

Nicole and I have not made cheese yet but we bought a gallon of whole milk and we’re going to do that this afternoon while Addie takes her nap.

Chad smoked a brisket yesterday and he’s been looking at the BBQ book. One of his friends does competition BBQ/meat smoking and Chad would love to try something like that so he’s been enjoying that book.

There won’t be any shortage of good food while I’m here.