Old Cat has been here since June. No kittens so I’m hoping that means there will be none but . . who knows.

Vince’s old Honda is now 15 years old . . just broken in as he would say! It’s the car we use for running around town, and the other day, I think it was making a funny noise. Of course, Vince didn’t hear it. He goes by the principle . . if I didn’t notice it . . it ain’t happening. So, I said “I’m not riding in that car any more til you get someone to look at it.” His response . . “OK, honey! I’ll take the car to the mechanic and say ‘my wife heard a noise’ and he will say ‘what kind of noise’ and I will say ‘I don’t know . . I didn’t hear a noise!”  To myself, and only in my head, I said “Fine! You get stranded . . don’t call me!”

The other evening, we needed to run to Home Depot. It was a legitimate trip. We have electric plugs on all the chicken coops but for some reason, the only coop in use didn’t have the kind of cover over the plug where we could leave something plugged in and still have the plug cover closed. With rain in the forecast and the baby chicks needing electricity, we needed to switch out that cover so . . we went to town. I said “I’m not going in the Honda” and Vince said “Yes we are!” So we did. We were not even to the end of our highway . . about 5 miles into about a 35 mile round trip and the car made a funny noise and Vince heard it this time. I don’t think it’s what I heard last time but now I’m paranoid. I wanted to go back home and get the Highlander but no . . we’re proving to the world that this 15 year old Honda is just fine!

We left Home Depot and had to go to Aldi and Kroger and as we were leaving Home Depot, Vince said “Do you think Cat could have been under the hood and that’s what we heard?” Oh, no! Don’t say that! Maybe!

I wanted to leave right then and go home and find Cat. How have I gotten so attached to a feral cat that hisses at me no matter how far away I am? There’s really no need to hiss at me when I’m 40 yards from you, right? And it should be obvious even to a Cat that she can outrun me . . easily! Besides, I’m the one who feeds her and gives her fresh water . . why on earth is she hissing at me nine months after I’ve proven to be a nice person?

We got home and what do you do? Cats don’t come when you call them . . especially feral cats who probably doesn’t even know her name and if she did, probably refuses to answer to “Cat” because who can’t come up with a better name than “Cat” Oh . . yes . . the folks who named their dog “Rita”. I guess we should have named Rita “Dog” and then we’d have “Cat” and “Dog”!

It was already dark by the time we got home so I knew she wasn’t going to be around where I could see her. 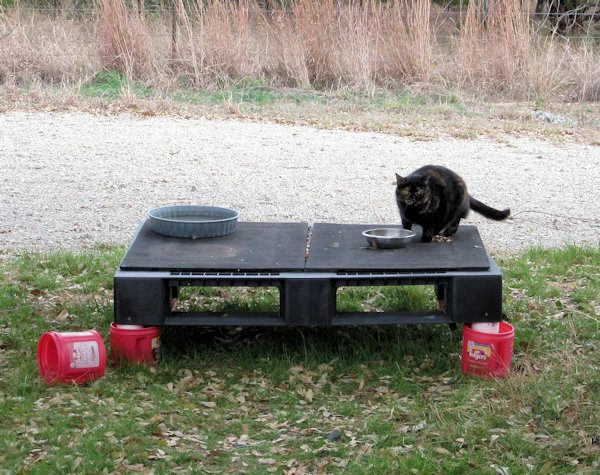 I really don’t think she would be under the hood of the car. She listens carefully for our house door to open (yes, it squeaks) and the minute she hears us, she either runs or gets in a position to get away from us. I think if she was under the hood, and she heard the house door open, and then us approaching the car, and the car doors opening, I think she would run . . I hope I’m right.

She’s probably had no human to love her ever before so I wish she knew that we care about her and were sad to think something might have happened to her.

Although  . . she has turned into one lazy, fat cat. Under the carport, we have a big box with bedding in it for her. Some days, it’s almost noon when she pokes her head out the box, stretches, looks around, walks over to her little food platform and sits there waiting for someone to bring food out for her. Maybe she’s hunting all night . . who knows? Lately I haven’t seen any “trophies” that she’s left for us. I’m thankful that I have not stepped over a partially eaten mouse or snake but it was kinda nice to know that at least one critter around here was earning their keep. I guess she looked at Speck, and Rita and Boots and figured out they do nothing and they still get fed so . . why should she have to work for her food.

It’s time I got out my Little Red Hen book and had story time with all these critters!