It’s been about 10 days since Vince pulled back all the mulch from the fruit trees . . about 50 of them . . he was a tired boy!

He raked all the old mulch back, fertilized the trees, mostly with granular type fertilizer, then put down all new mulch. They all look so nice! 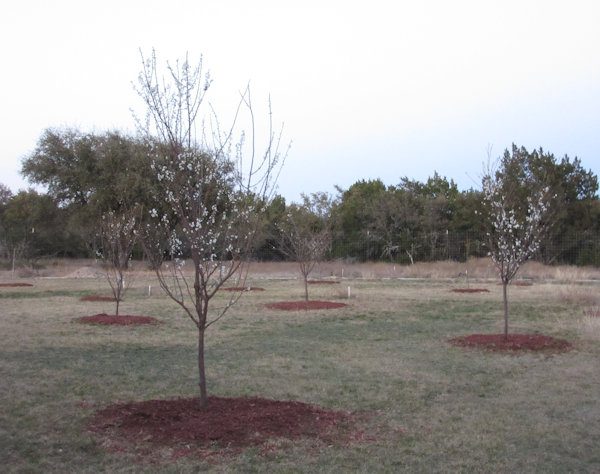 The problem is that the chickens love to scratch around in the mulch, find bugs and who knows what else. Even though we’ve been watering the trees, I didn’t want to let the chickens out til after we’ve had a good rain so all those fertilizer granules are far enough down or dissolved that they don’t attract the attention of the chickens. From what I’ve read, the chickens might eat one or two granules, decide they don’t like it and not eat more so it probably isn’t a problem but I don’t want to take any chances.

It’s raining! That means the ground will be soft and there will probably be more bugs under the oak trees where they love to scratch (no fertilizer applied there), and hopefully the fertilizer will no longer be where they notice it and are tempted to eat it.

I’ll keep them in the fenced pen til the rain stops . . maybe into the weekend so by then, it will have been almost three weeks since the fertilizer was applied. They will be so happy to get out again!