We could possibly have the world’s laziest dogs!

Poor old Speck. He’s going downhill quickly and it makes me so sad to watch. The vet wants to do some x-rays . . he may have tumors in his nasal area. I’ve put it off because even if he does have them, at 16 years old, we’re not going to do any major surgery on him. He needs his teeth cleaned and I hate to put him under anesthesia with the breathing problems he’s having but the vet says sinus issues can be aggravated by his teeth being so bad so . . do we go ahead and clean the teeth and hope that helps the breathing/sneezing/wheezing, or do we spend lots of $$ on x-rays to find out that he has tumors that aren’t going to be fixed? We’ve had lots of years of enjoyment with him but these days are tough. He’s a dog . . lots of people are going through way worse situations so I try to keep it in perspective.

Rita, on the other hand, is a mischievous little rascal. We go for weeks and weeks and weeks with no accidents and then I leave the door open to one of the two bedrooms — the only rooms in this house with carpet, and she runs in there and pees. Give her 10 seconds in a room with carpet and there’s trouble. I told Vince over the weekend that as soon as I’m brave enough to move all the “stuff” out of those two bedrooms, the carpet is coming out. I figured he’d squawk but he said . . do it! My plan is to do it next Fall. It’s already gotten too warm here to want to be moving furniture and cleaning out the closets. Yes, I’m making up excuses to keep from having to do all that work!

So, what would I put down instead of carpet?  I don’t want laminate. We have hardwood in the rest of the house except the kitchen and bathrooms and honestly, with dogs and toe nails, I don’t think I want wood. Besides, it’s dark wood and dust . . oh, the dust . . it shows! Tile is cold but we don’t have that much cold, and with a rug or two, it’s ok. Until Rita is 100% trustworthy, Walmart rugs that go into the washer a few times, then get thrown out and replaced are best. 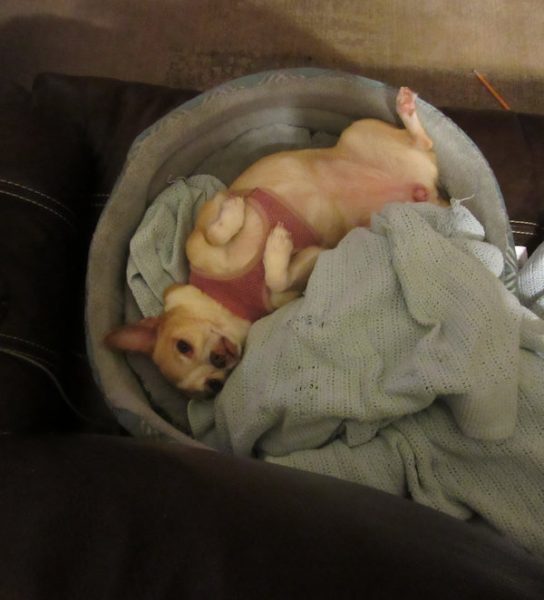 She loves her bed! I love that she’s not sleeping and shedding directly on the brown slip cover. She has a bed in our room and at night, I put it on top of the covers and bring in her blanket and she sleeps there and doesn’t move.  She most often sleeps on her back, just like in the picture. Not very modest, is she?

During the night, I sometimes bump her bed and she never moves. Every now and then, I’ll sit up in bed and reach down to make sure she’s still there. She’s such a good sleeper. I guess that makes up for her other bad habits.