Count on me to always do the wrong thing! Most mornings I get out of bed, put on the jeans from yesterday and keep on the T-shirt I slept in. The plan is I’ll run outside, let the chickens out, do what needs to be done in the greenhouse, feed Cat, play with Boots for a while, come back in and shower and put on clean clothes.

Once I’ve let the chickens out, fed Cat, played with Boots, I may decide to water the fruit trees or piddle in the garden and then I realize I have to get lunch done so I rush in and do that, then Vince goes back to work and I go back outside to finish whatever I was doing before and first thing you know . . it’s evening and I never got a shower or put on clean clothes.

This morning, I got up, let the big chickens out, fed Cat, played with Boots, came in . . told Vince I was going to shower and then I’d fix breakfast. He even said “Why are you showering now?” Well, I thought I was doing the right thing . . but I wasn’t.

As soon as breakfast was over, it was time to get those chickens out of here. Helen was right . . what goes in comes out and when they get scared, it comes out at a rapid rate. I carried them over to the new coop in groups of 3 . . four trips with 3 chicks and 1 trip with 2 chicks. I think at least half of them pooped on me so I had to come in, take another shower, put on more clean clothes for the second time  .. before 10 a.m. 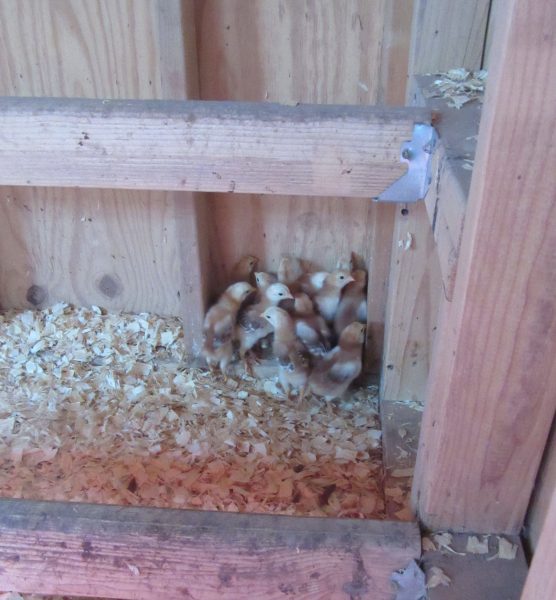 I brought the first two loads over, put them in the big tub, went back to get three more, came back and three were already out of the tub. I figured I’d catch those three, put them back in the tub, put the screen back on top of the tub . . after I brought the others over. By the time I had all 14 chicks in the new coop, 8 of them were out of the tub so I asked Vince if it was ok just to leave them all loose in the coop and he said fine . . so I did. They were all huddled in one corner, scared to death.

We only had the heat lamp in there but I thought maybe if I brought their familiar little brooder in, they would get under it but so far, they have not. They’re huddled together, in a different corner, but closer to the heat lamp so I think they’ll be ok. There are two sources of warmth in there so I hope they find one and keep warm! It’s going to be 51 tonight but they need to stay around 85 at this age so . . I’m hoping I’ll have 14 healthy, chirping little chicks in the morning.

At least they’re out of the guest room!