Those baby chickens have been in the house for over a week. That is over a week too long! My main concern is that Rita is going to get in the room with them and figure out a way to have a chicken dinner. My other main concern is that . . well, after a while, chickens begin to smell not so good.  Two dogs, 14 chickens and us . . in a house that’s too small . . something has to go and today . . that would be 14 little chickens.

Who remembers Helen? Back in 2009, she sent me this email.

It’s obvious that you know ABSOLUTELY NOTHING when it comes to chickens!!!!
A hen will lay one egg per day – even if it lives in a nice lime green house with purple trim.
There is a rooster – the male of the species.  He likes to be on a high fence, crowing – announcing daybreak.  The neighbours would enjoy this.
What goes in a chicken comes out the other end – kind of juicy.  If you don’t want this all over your back yard, a fence will have to be created to enclose the ‘cute things’.
Flies just love chicken poop – be prepared for an invasion of flies.
A hen just doesn’t come to your back door and deposit her egg each day.  She has to have a nest in the chicken coop – check Google for chicken coop.  Straw is used to cushion the egg being dropped from the hind end of the chicken.  (Cracked eggs harbor salmonella.)  Sometimes the hen will poop on her deposit – so the straw makes it easier to clean.
At night, chickens like to sleep on roosts – check Google for that.
While they are in their coop, they will poop – dirty creatures!  Since it is juicy, you’ll have to put straw on the floor of the coop.  Eventually, it will get kind of ‘high’ with smell, so you’ll have to clean the coop.  This means making a trip to the store for a pitch fork – check Google for that.  You will have to load the straw and poop in the back of the husband’s truck and haul it somewhere – most landfills won’t accept agricultural wastes.
After this, the box of the truck will have to be washed – it will smell.
Oh yes, the chicken coop will have to be large enough so that you can get in there to gather eggs and to shovel poop.
Finally – most towns have a bylaw – check Google for that – where livestock – pigs, cows, elephants and chickens – are not allowed in town limits.
Stick to quilting – something you know about!!!

Poor Helen. I think she figured I was just to dumb and she would no longer waste time reading my blog so I didn’t hear from her again after that. I feel kinda bad for her though because apparently, in some ways, she didn’t know so much about chickens. We have “egg boxes” that stick out from the coop so I don’t have to get inside the coop to get eggs, and for the most part, I don’t have to get inside to clean out the coop. And, who takes their chicken poop to a landfill? We let it age and use it in the garden. In 8 years of having chickens, I’ve never owned a pitchfork and I’ve never put the poop in the back of Vince’s truck, though we have gone and picked up rabbit poop and other kinds of poop to bring back home for the garden.

Oh well . . I think even Helen would be proud of my progress with my chickens. Or, maybe not!  🙂

Who remembers when we first got chickens in Missour? They were cute little fuzzballs and they were living in a box in the basement. We didn’t have a chicken coop yet but don’t worry . . Vince was going to get one built. The chickens grew and they smelled bad. The were moved from the basement to the basement garage into a bigger box. They still smelled. The coop still was not built and not progressing very quickly.

He did eventually get the coop built. 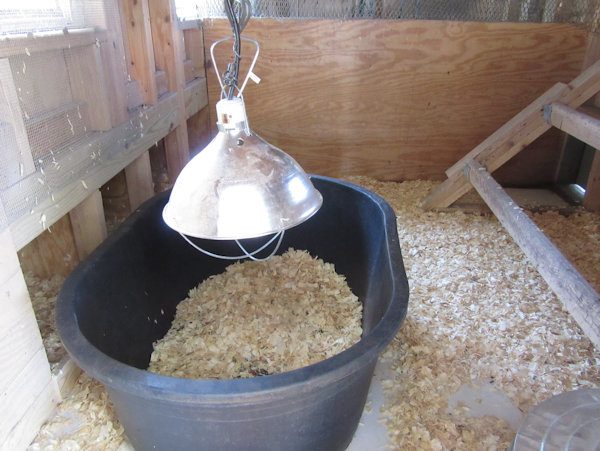 One of the empty coops is now cleaned, scrubbed, sanitized and ready for the 14 little chicks to move in.

This is the first time ever that we’ve had a coop ready before the last minute. These little birds are growing so quickly and they’re so active. The plan is that they will stay in the rubber tub with the heat lamp over them til they’re fully feathered. The only reason not to let them run wild in the coop is that I’m afraid snakes may get in there and eat them. I’ll put a screen over the top of the tub and put bricks on top of it so I’m hoping that will make it fairly snake proof.

Today is the day .. they will be moving into their first permanent home and we will be back to having just the two dogs and the two of us living in the house.