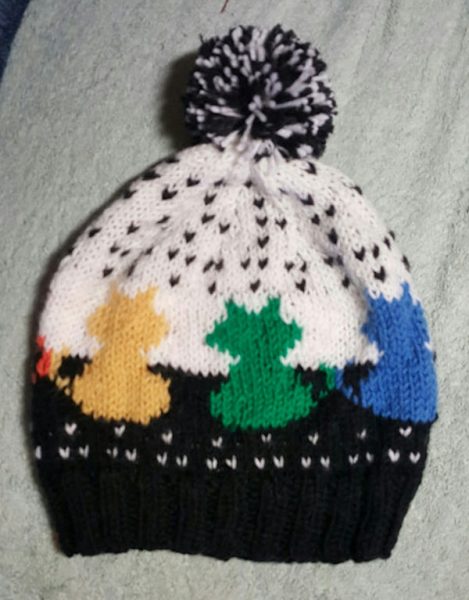 The pattern is Meowf. I had started the ribbing for the hat a few days ago .. one night when we had too much going on for me to be able to work on Hitofude but I could do ribbing. Sunday evening, we came in from working outside and I thought . . I’ll knit up to the cat part and then I’ll stop for the night. When I got that far, I decided that maybe I’d just start the cats and see how that went. The hat is not worked in the round and there are separate bobbins, or in my case, a mess of thread. hanging down while working on those blasted cats – threads for each colored cat, as well as either a black or white thread in between each cat. Really, once you finish the black part between the cats, there’s the black thread and the white thread.

About 10:30 p.m. Vince said he was going to bed. I said “I’m going to get to a stopping spot and then I’ll be there. At a little after 3 a.m., I finished the knitting but not the sewing the seam or weaving in the million ends. 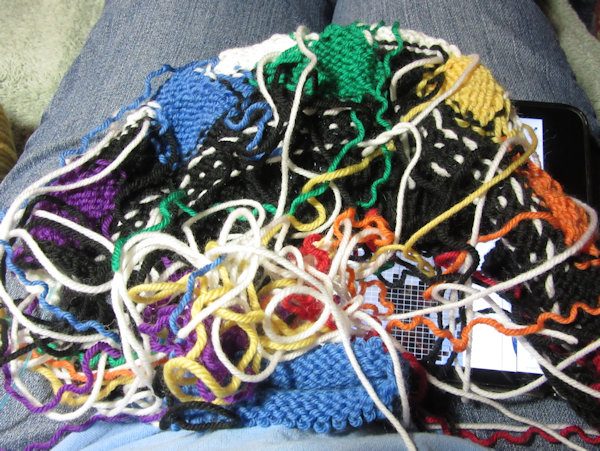 The hat is cute but I don’t see me making another one. I do not like colorwork!

And, thank you, Rita, for waking up at 5:15 a.m. to go outside and then not wanting to go back to sleep. All day yesterday I kept planning to take a nap but . . just finish one more thing and . . there never was a time for a nap.  I was in bed last night way before 10 and if Rita, or Speck, or Vince or anyone else tried to wake me up . . I didn’t hear a thing. Slept like a rock but still managed to wake up before Vince . . who hears the alarm clock but I don’t hear it.

Maybe after a good night’s sleep, I can come up with a new knitting project today.