Some time about September, Nicole told me that her mom had asked her to go to “some fair” in Topeka, KS. Oh, my . . Nicole was going to the fair I wanted to attend.

When I saw that there was going to be a fair in Belton, TX, about two hours from here, I knew we were going . . no talking me out of it.

Over the next few days, I will share lots of info but the best info I can share is this:  Mother Earth News Fair locations. If you like the kinds of things I like, and blog about, you may want to figure out a way to get to one of these fairs if there’s one close to you. 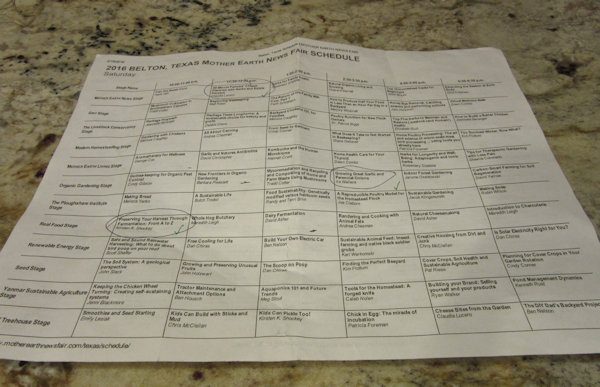 I had printed the workshops page and had marked it up so much, trying to decide which classes to take, that I had to print clean copies for both of us so we could figure out what we were wanting to do.

The “workshops” are big, open areas with chairs for the spectators and a stage for the instructor. There’s no charge for them and you walk in and out at will. 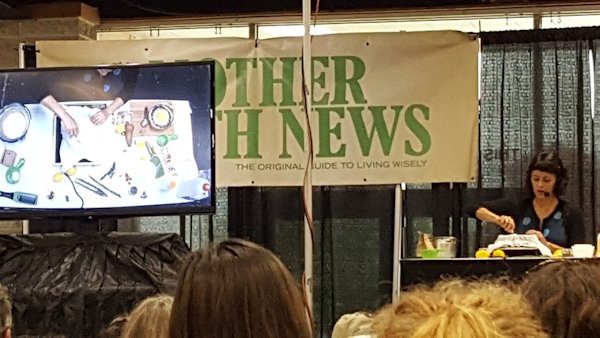 There wasn’t a bad seat anywhere. There was a big screen to the left and a big screen to the right of the instructor so no matter where you were sitting, you had a good view. The sound was perfect. At any given time, there were 12 instructors spread out across the Expo Center. One of the 12 at each time was a kids workshop and most of those were hands on. The workshops lasted one hour and there were 30 minutes between the workshops so you had plenty of time for bathroom breaks and getting to the next location.

The classes I took today were amazing and I think Vince’s classes were spectacular!  Mother Earth News did an amazing job with this fair and I’m sure they do with all the fairs. Any time there’s one close enough for us to attend, I’ll find a way to get there!

My hat is off to Mother Earth News for an excellent job in putting on this fair.