The Loopy Ewe is hosting a “Monthly Mixer” and you can read about it on this post on TLE’s blog. The good news is: It’s for knitters and quilters so almost all of you can play along. You can use fabric/yarn you already have . . just so it came from The Loopy Ewe at some point. They say . . “minimal rules/maximum enjoyment”! Their theme this year is “Tour the Galaxy”.

That’s what I need this year — minimal rules!  Last year, I had fun but it felt like I was knitting non-stop to meet deadlines. I’m not doing that again. I think that’s how I lost my quilting mojo.

This year I’ve said I’m only knitting what I want to knit. If there’s some incentive program, and I can fit in something I want to knit, I’ll do it but otherwise, not doing it.

When I saw The Loopy Ewe’s Monthly Mixer, I figured I can do some months . . maybe not all months. January is “P” for Pluto. The letter “P” could be used in the yarn (brand, name or color), in the pattern, in any way you can find a “P”. I went through my queue and found 5 or 6 patterns that I would love to make, found some Pakokku sock yarn that I could use to make socks or hats but a friend needs some fingerless mitts. In my library was Pathways Fingerless Mitts so that won out. There’s enough Cascade 220 Superwash in the color “Straw” still sitting by my chair from the pillow I finished last week so I grabbed that and cast on. 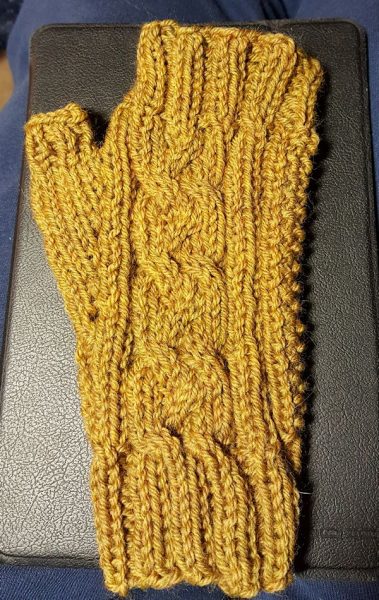 As soona s I decided on a pattern and yarn, I started knitting and in just a couple of hours, the right mitt was done!

Passepartout is another one I’d love to make so I may get two “P’s” done in January.