For this semester (Loopy Academy at Loopy Ewe) that comes to a close in two days, we had to use at least 225 yards and one of the projects was a pillow using worsted or bulky weight yarn. Nicole and I both chose Handspun Cushion, which was so easy to make but . . I’m glad they aren’t inspecting and giving us a real grade because I made a mistake right there in front. It’s supposed to be 7 rows of purl and I made 1 row of purl, then a knitted row, then more purls and I was completely finished before I noticed it so . . it stays like it is. 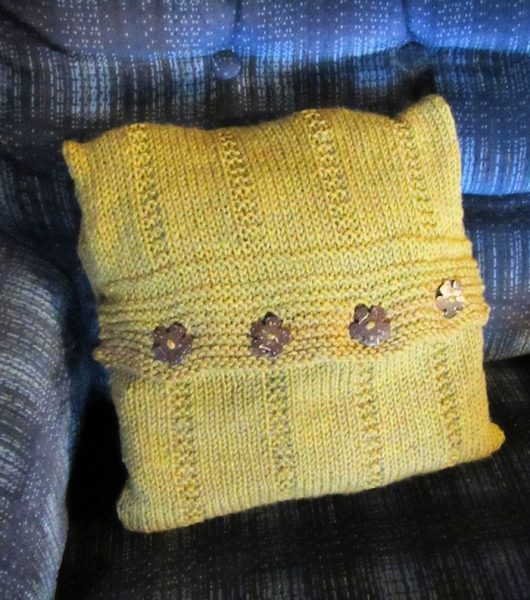 Addie’s room is pink and brown and Nicole made the same pillow using pink yarn and we both used the same buttons so I’m giving this pillow to her for Addie’s room. Nicole has an extra pillow form so I just stuffed mine with loose fiberfill for the picture and she’ll put her form in there and it will look much neater. The one Nicole made with the pillow form in it looks really neat. I wouldn’t mind making a couple more for us.

The pattern is so easy and mindless . . I saved it to do during the car or when I was waiting somewhere and then, because I kept putting off working on it so I’d have it when I needed a mindless project, I almost didn’t get it finished.

But, it’s finished and now we await the announcement for the next semester’s requirement. Last year it came out the end of January so I have a while but I’m having fun with Loopy Academy. Nicole and I are doing some of the same projects . . some are not the same but it’s something we do together and enjoy.

If you want to join in Loopy Academy and haven’t done it yet, you can still do it. You can even do two semesters at once if you want to play catch up (I think). It really is fun and the projects so far have been very do-able. Each semester requires a bit more yarn (more knitting) but for this semester, we had four months and three projects that each had to be at least 225 yards. It isn’t hard at all and it’s fun and . . there are prizes!  🙂