Every time I write that something is homemade, I’m reminded of the comment I once got about my homemade hand cream. Because I was using storebought ingredients, the reader didn’t consider it “homemade” so when I’m getting ready to write about homemade yogurt, I’m thinking . . technically I suppose it isn’t homemade because I bought the milk . . where do you draw the line? I’m calling it homemade yogurt

In 2014, I bought the Cuisinart Yogurt Maker and wrote about it here. That is by far the easiest way I had tried making yogurt. I love the Cuisinart for so many reasons. The yogurt is delicious. You pour the milk in, push a button and walk away. I love that it will keep it cold til I get back to it so if it becomes “ready” during the middle of the night, it cools it down and keeps it cool. I use between 4 and 5 cups of milk and get about 3 cups of Greek style yogurt out of it.

With the Instant Pot (electric pressure cooker), it has a yogurt setting so I would pour my milk into the IP, hit “yogurt” and then “adjust” and let it bring the milk up to the 180º, then I’d cool the milk down, add the “starter” (which is simply yogurt from the previous batch), pour it all into the Cuisinart Yogurt Maker and hit start. After 6 hours, or anytime thereafter, I’d get back to it and the yogurt would be done.

The problem is . . I’d only get 3 to 3-1/2 cups of yogurt after the whey was strained out. We use yogurt instead of sour cream – for potatoes, with horseradish over prime rib or even sometimes steak. Of course, we eat the yogurt, sweetened with honey mostly but sometimes with brown sugar, maple syrup or . . plain old white sugar. We add fruit, nuts, granola. Sometimes we freeze it for a bit and it’s like a soft frozen yogurt. Lately we’ve been using yogurt for the base of a salad dressing. However we use it, we’re using a LOT of yogurt and even though it seemed like I was making it often, we were running out more than once a week.

One thing you definitely need to know is this: When using the Instant Pot for regular, spicy, savory type meals, the seal will absorb some of the odors which may transfer to foods like yogurt, tapioca, rice puddings. You can buy a second seal, which all IP users should probably keep on hand. Since I had ordered a backup Instant Pot during the pre-Christmas sales at Amazon, I decided to open it, mark it as a “No Odor” pot and use it for my sweet or non-savory type foods. 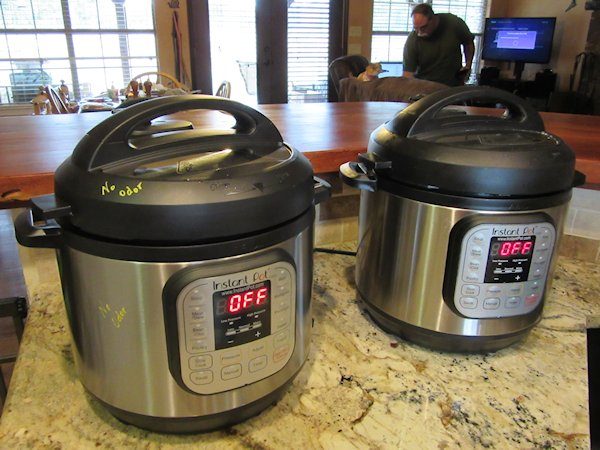 Also, if you don’t have a thermometer that will beep at you when the desired temperature is reached, this one is great. If you’re just starting out, any old kitchen thermometer will work but once you know  you’re going to love homemade yogurt, you may want to invest in something that will let you know when the milk has cooled to the desired temp. I can’t tell you how many times I had to reheat my milk because I let it sit too long and instead of being in the 115 – 120º range, I’d forget about it and it would be 90º when I remembered to check it. With the Polder, I set it for 120º and it beeps when the milk has cooled down to that temp.

Where would I be without my Instant Pots? On the IP Facebook group, I read every now and then about someone who doesn’t like their pot and I just can’t figure it out!

So . . I tried yogurt and while it does take a little more attention than does the Cuisinart Yogurt Maker, I was able to use a whole gallon of milk. 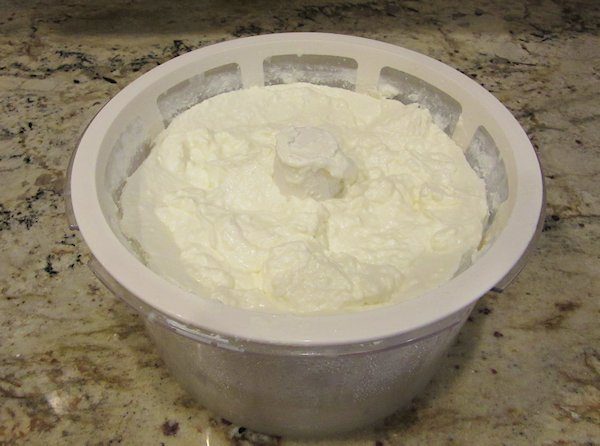 There was actually more yogurt than would fit into the strainer so I poured part of it through my bouillon strainer and after a bit of the liquid had strained out, I was able to fit it all into the yogurt strainer.

If you read through Cami’s post, you’ll see that she lets her yogurt drain for an hour and she ends up with almost 2 quarts of Greek style yogurt. We like our yogurt a little thicker so I drain it in the yogurt strainer overnight in the fridge.

From one gallon of milk, here’s what I ended up with as far as yogurt. 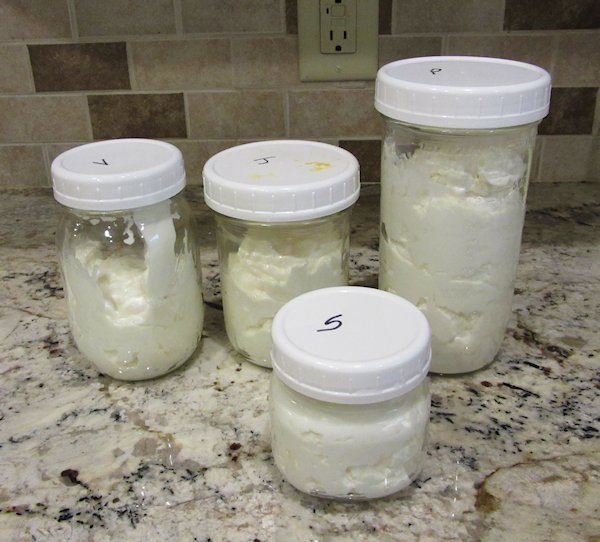 If all those jars were combined, it’s probably a bit over 3-1/2 pints of yogurt so I don’t get a whole lot less yogurt but ours is pretty thick . . the way we like it.

And if you’re wondering about all those letters: 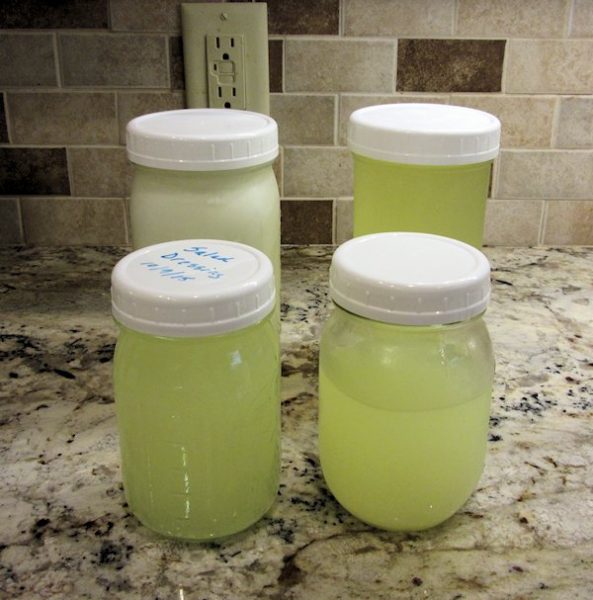 If you like buttermilk, there’s NOTHING better than homemade buttermilk. The liquid that comes off right in the beginning is the buttermilk. You may be able to tell that the whey gets clearer as the yogurt drains longer.

We drank most of the buttermilk the first day. The whey will either be used in bread, muffins . . something like that, or the chickens will get it or I’ll cut it with water and pour it around some of my acid loving plants . . blueberries or tomatoes.

When you figure that I pay about $1.69 for a gallon of whole milk and then I get almost 2 quarts of amazing yogurt, along with a quart of buttermilk and all that whey . . not a bad deal.

If you wonder what we do with all that yogurt . . 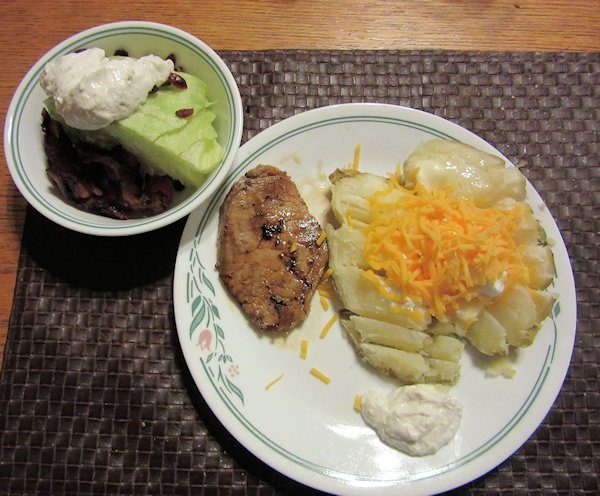 Then for dessert . . yogurt with clementine oranges and ginger. 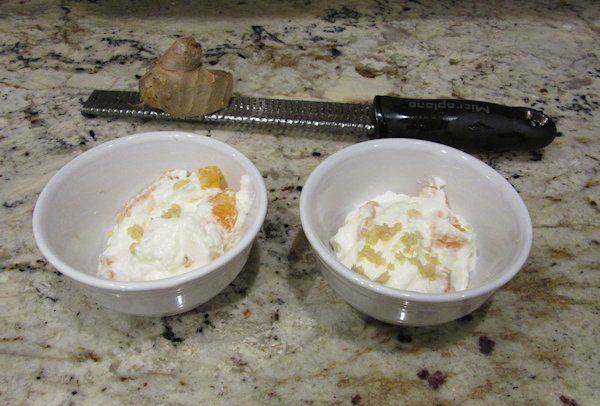 Most weeks, I will probably make 2 or 3 one gallon batches of yogurt and . . we’ll still run out.