Not exactly Christmas colors but that’s what my arm looks like! 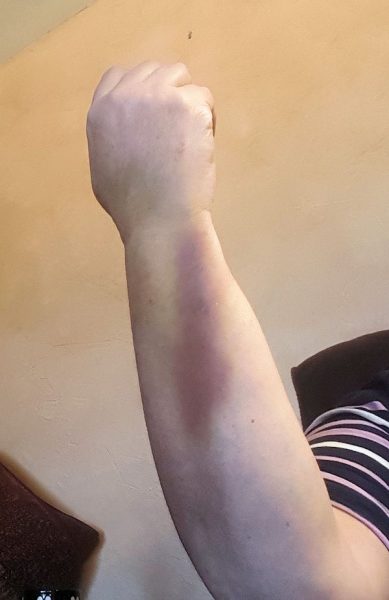 It probably takes a normal person a lot of effort to slam your own arm in the door but I managed. And then, I almost did it again the next day!

You might wonder how I did this. UPS had been here and they had a small package but it was quite heavy. The driver set it down on the porch and I was going to bring it in the house but I couldn’t punch in the door code while holding the package with both hands so I set it down right in front of the door, punched in the door code, and decided Vince could carry the package in when he got home.

Have you ever heard of someone being so absent minded? There was immediately a huge knot on my wristbone and it hurt so bad, I really thought my wrist was broken. I was thinking . . if I go to the E.R. and they put a cast on it, I can’t finish knitting my sweater but maybe I can manage to knit with a broken arm til I finish my sweater, then get a cast. I realized I could bend my wrist back and forth, left and right, so it probably wasn’t broken. But it was swollen for several days and it’s still sore.

This all happened on Friday and the picture was taken today so it’s starting to get less bruised than it was but it still hurts if I touch it . . even wearing a long sleeve shirt that’s fitted around my wrist hurts. The bottom of my arm is more bruised than the top but the top is more tender and sore. You can see that even my hand is a bit bruised.

Then the next day . . I almost did it again. We have long (not round) door knobs. It was chilly outside so I went out to let the chickens out and I grabbed Vince’s old outside sweater, which has super long sleeves. I don’t have to wear gloves and it keeps my fingers warm. But, as I was slamming the door behind me, the sleeve got caught on that blasted door knob and I couldn’t get my hand loose. Thank goodness, I stuck my foot out behind me and stopped the door from slamming on the same arm.

Maybe I should ask Santa for some kind of body armor for Christmas so I don’t get hurt or maybe . . I should slow down and pay more attention to what I’m doing.