While I surely don’t wish Vince any bad luck, I’d love to know why I’ve now been stung twice by a scorpion, once by a brown recluse and once by a black widow and the worst he’s had are a few wasp stings .. and I get more wasp stings than he does! 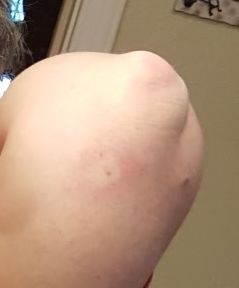 Yesterday I was picking up some boxes that were piling up at the door . . UPS deliveries and the like. There was a plastic bag with a new cover for the grill and I stuck it under my arm to carry it, and picked the boxes up  in my hands and . . OUCH! I dropped everything and there was the scorpion. That one won’t be stinging anyone else but you can bet there are plenty more where he came from.

I had told Vince . . one more scorpion sting and I’m out of here but . . you know I’m not going anywhere. Maybe next time . . but let’s all cross our fingers and hope I don’t get stung again but if I had to guess, my guess would be that I’ll be stung again.