This morning . . there’s craziness in the news, Speck seems to be doing worse this morning . . my outside chores were done and I sat down thinking  . . I could cry all over again, but I had already put on makeup and would rather not have mascara streaming down my face. Before picking up my knitting, I went to read Facebook and see what my friends were doing and one friend had posted a link to Letter to Future Daughters-in-Law  . . mostly thoughts from a boy’s mom to her future daughter-in-law.

Without a doubt, I could have done a better job or raising my son . . mostly I could have had 10 kids instead of one spoiled little boy! 🙂

Reading through the Letter to Future Daughters-in-Law, I am again reminded that Chad brought me the most perfect DIL. I love her like my own daughter! I love video chatting with her every day. I love the way she raises my granddaughter. I love how enthusiasm for knitting. I know Chad is a great dad but the truth is . . Chad is working 60 or more hours per week most weeks and it’s Nicole that’s doing way too much of the parenting. I love how, from what I can see, she talks to Chad, how she treats Chad, how she is so willing to to do most any crazy idea Chad wants to do. I love how, when Chad has worked 6 days straight and gets one day off, and he wants to go fishing with the guys, Nicole understands that he needs that time . . more than she needs a little time with him.

I’m thankful . . ever so thankful . . for her parents . . for the way they raised her, for the values they taught her, for her adventurous spirit. I am thankful that her parents have opened their home and their hearts and they, along with the grandparents, treat Chad as one of their own, plan their holidays around his work schedule, that Nicole’s dad doesn’t seem to mind Chad taking over his shop and using his tools, and Nicole’s mom doesn’t seem to mind Chad taking over her kitchen and making a big mess and as she says . . leaving a big mess behind.  🙂 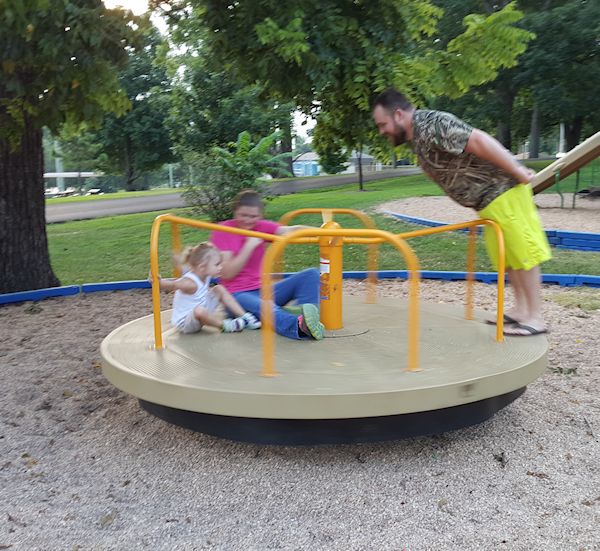 I’m thankful that Nicole was willing to pack up and leave the town where she was born, raised, went to high school, went to college . . leave her grandparents, her parents, her sister, her friends . . leave with a little baby and move with Chad for his job . . to a town where she knew no one . . and then move again, and they will move again and again if Chad keeps his current job. Nicole is always willing to follow where Chad leads.

If I could change one thing about her, I’d change her address . . or maybe it’s my own address I need to change!  🙂

Seriously, despite the bad news in our world today and despite my old dog losing ground in this thing we call life . . I am blessed and I can put a smile on my face and go on with my day, knowing that whatever happens in my little world, I have a great life.