Even though I spread the work out over three days, the final day was a lot of work! First, the jars were all washed and lined up, along with the ingredients. 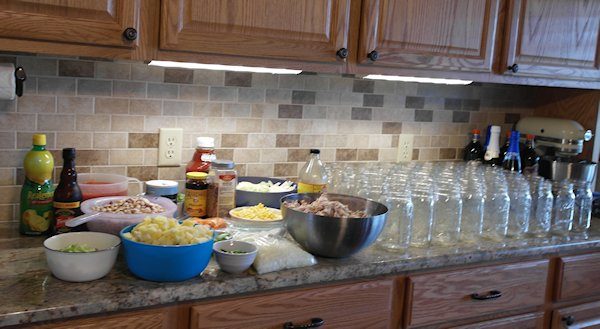 Here’s where “Judy Math” came into play. In one canner, I can put 14 quarts and in another, 7 quarts, so that’s 21 quarts per batch. I wanted to divide it up into enough jars to make 2 batches, which should have been 42 quarts . . not 41. Don’t ask me how I figured that but I made 41 quarts.

When it’s time to serve, I’ll open a jar, and add either a jar of canned chicken or venison. There’s not a lot of meat in each jar, but there are a lot of veggies. I’ll also add at least one cut up potato and cook the soup long enough for the potato to be very tender and I’ll add a handful of dehydrated okra and both the potato and okra will thicken up the soup. By adding another jar of meat, and the extra meat, we’ll get at least two meals out of each jar. Yum!