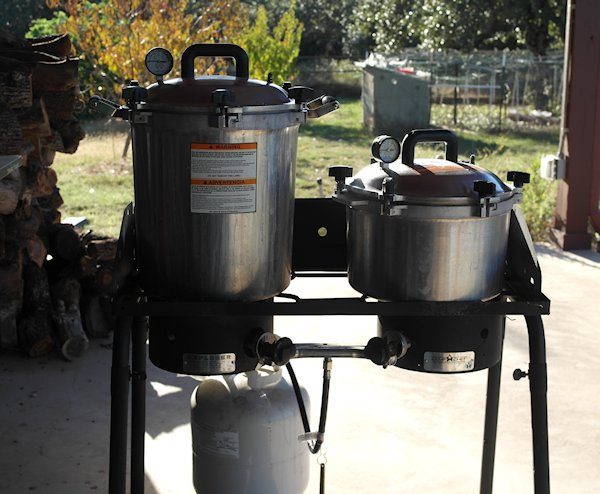 The backstrap and tenderloins will go into the freezer but the rest of this one got canned. Once the turkeys (yes, there’s more than one now) are out of the freezer, and Vince gets another deer, I’ll grind some of the meat for chili, for mixing with pork for grilled burgers and meatloaf but there’s seriously not one square inch of room in a freezer so I went ahead and canned all this deer. This afternoon I’ll take a turkey out of the freezer and put it into the fridge to defrost so I can brine it for a day or two, then I’ll put the tenderloins and backstrap into the freezer. 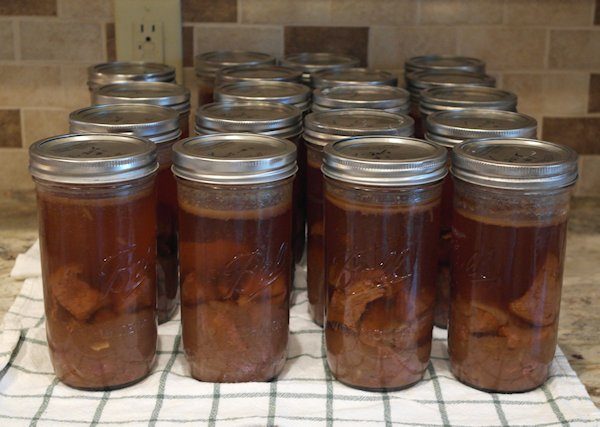 To can the meat, I cleaned off all the sinew and silvery parts, cut it into chunks, browned it and put the chunks into the 1-1/2 pint jars. I weighed it out and put about 11 ounces of meat in each jar. That will give us enough for dinner and we should have enough leftovers for another lunch. In a separate pot, I made a weak beef broth mixture (water and Better than Bouillon), then added Beefy Onion Soup mix. That mixture was boiled for a few minutes and then poured over the meat to fill the jars. Canned at 10 psi for 90 minutes.

I got 19 jars and kept out enough to fix for dinner tomorrow night.

When it’s time to serve, I’ll thicken the juices (cornstarch or flour and water), add green onions and a bit of jalapeno pepper and serve over rice. Yum!

It was funny because Chad had only gotten one deer during bow season but he always gets several and that’s about all they eat for meat. Nicole said she had told him . . stop being picky and get some meat for the freezer! While I was texting her about Vince’s deer, Chad texted her that he had gotten one so yesterday morning, we were exchanging pictures of what we’ll be eating this winter!  🙂  The deer in MO are way bigger than the deer we have here but we were happy with what we got.