It seems like for years and years I’ve been hearing about Zaycon Foods but, living in a small town, they never come to where I am. They deliver to Abilene and to a place near Killeen. According to mapquest, it’s 1 hour, 40 minutes to the location in Abilene and 1 hour, 46 minutes to the place near Killeen. The problem is that often the pickup times just don’t work for us. The events scheduled near Killeen, the pickup time is between 3:30 and 4:00 p.m. That puts us on the road at or near dusk and this time of year, with all the deer on the road, it isn’t worth it. Sometimes the pickup times are between 8 and 8:30 a.m. and that puts me leaving before daylight so when I saw that they were having an event in Abilene with pickup time 12:30 – 1:00 p.m., I jumped on it. At the time, they also had a 10% off discount code if you bought a certain amount .. which happened to be at least 80 pounds of chicken.  Yes, I ordered 80 pounds of boneless, skinless chicken breasts. You can bet I won’t do that again! If I had gotten bacon, or sausage or ham or anything I could just stick in the freezer, that wouldn’t have been bad but I wanted to can the chicken. That’s a heck of a lot of chicken . . 53 quarts to be exact!

I started out canning it outside . . like I always do. 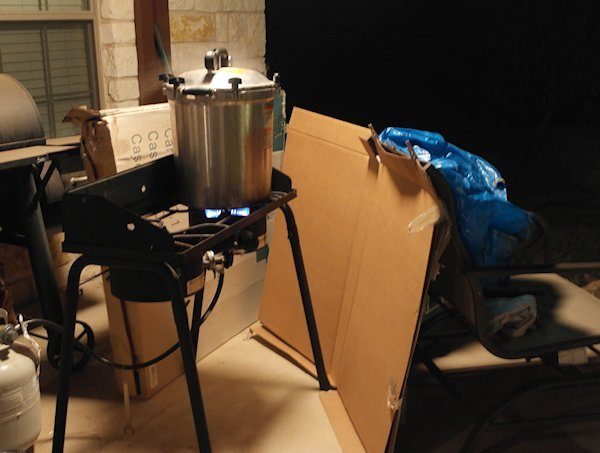 Just as I got the second batch going in the big canner, the wind picked up, it began to drizzle rain and . . I had a problem. I stacked the coolers up and put a chair near the canner trying to block the wind from messing with the flame. Then I put a tarp over the chair to block the wind from going through, then I scrounged up some boxes . . I’m going to get through the second batch with the big canner outside but the third batch will have to be done inside. 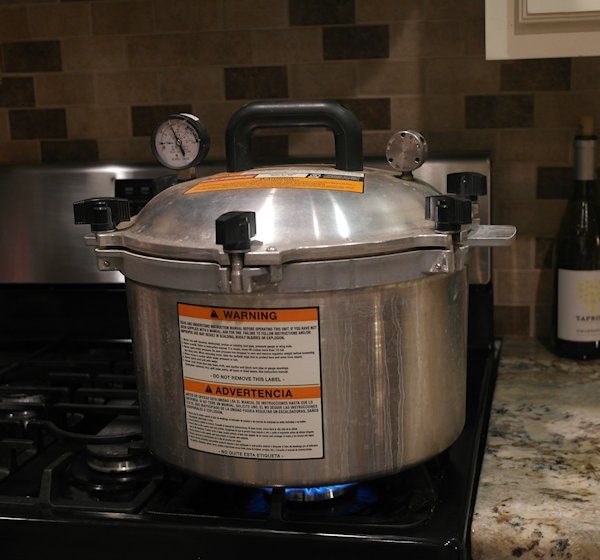 I gave up and brought the small canner in for the second batch in that one.

It’s going to be a long night!  Not only because of the canning but Rita has decided to wake us up at 4:30 every morning this week. I set the clock for 7 this morning, knowing I wouldn’t sleep much past 6, but just in case . . we wanted to leave the house at 8 to get a little shopping done in Abilene before picking up the chicken. But right on schedule, Rita was up at 4:30. I got up with her hoping she wouldn’t wake Vince up but the minute she got in from our walk (in the dark!), she ran and jumped in the bed and woke him up.

It’s a heck of a lot of work but it will be so nice to be able to open a jar of chicken when I need it. I’ll be thanking me then!  🙂