Addie’s pre-school was going to a pumpkin patch today. Addie has been  . . let’s say . . not the model student and after a month of pre-school, she has decided she’s not going back to school. Nicole called me the other day and said “I think I am beginning to know what you went through with Chad!”  Chad deserves this kind of payback but I don’t think Nicole does, and as the mom, she will be the one who gets all the bad reports from the teachers. Addie is smart, hard headed and as the only child and only grandchild to both sets of grandparents, she’s learned how to manipulate adults. I’m thankful she is not a whiner but she is definitely going to be in charge of everything she does . . whether it’s home with mom and dad, with grandparents or at school and she has a whole lot to learn about sitting down, taking instructions and being quiet. 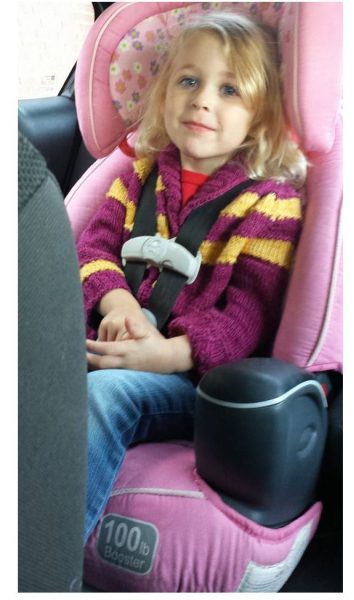 But, you have to admit that she is so darned cute! I remember my mom, who was a teacher for many years, telling me when Chad was about Addie’s age:  “He isn’t going to be nearly so cute when he starts kindergarten and there 25 more just like him in a classroom!”

I can’t believe how grownup she looks. It’s been less than 2 months since I saw her and she’s changed so much already.  Addie had to wear her school T-shirt for the field trip but they needed sweaters, and Nicole was going on the field trip too, so they wore their matching sweaters that I made them last year.

Reports are that the kids all had a great time and Addie didn’t get in trouble. That’s good news!  🙂