Really, no matter how smart people think their chickens are . . I just don’t believe they have a lick of sense.

Sunday night when transferring chickens from the coop to a cage for our friends to take home, one black hen escaped. She ran straight out into the woods and we’d catch a glimpse of her every now and then but I could not catch her.  I left the gate open for the run where she had lived. I left the coop door open so she could go in. I put water out in several places for her.  For four nights she survived in the woods. Every morning I expected to walk out and find chicken parts or at least, a pile of feathers, but she survived.

After four days in their new coop, I closed all the outside orchard gates and opened their run gate. I put water in several places around the orchard, and waited. They all stood there and looked at that open gate like “It’s a trick! Don’t go through there!” and not one of them left the enclosed run. I was saying “GO! There are fat, juice grasshoppers out there that I need for you to catch!” But, no . . they wouldn’t go out the gate. I know, without a doubt, that if I had accidentally left that gate open and didn’t want them to run out, they would have been out lickety split!

I figured I’d just leave them alone and hope they ventured out. After a few hours, I went to check on them and the loose black bantam had gone through the gate and she was in there with them. 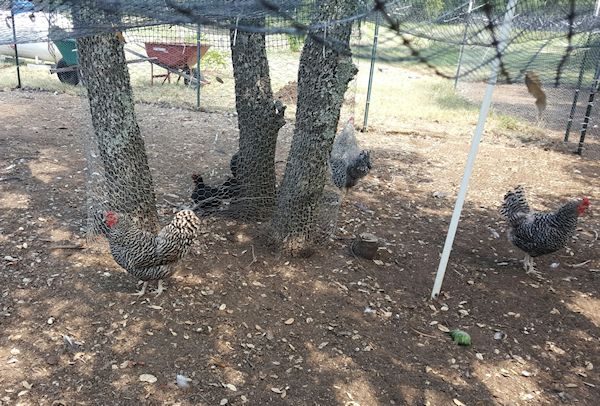 Chickens don’t always take kindly to a new coop mate so I’ve been watching to make sure they aren’t mean to her. We had fenced off these trees to keep the chickens from flying straight up the trees and of course, they figured out right off the bat how to get under the wire. The little black hen seems to feel that it’s safe to run in there if they get too rough with her. Normally, the Dominique chickens are pretty easy going so I hope they’ll accept her and play nice.

I know I said I wouldn’t but . . if we ever want more chickens, she’ll be chomping at the bit to sit on eggs and IF we want more chickens, we can put Dominique or Sussex eggs under her and at least get full size chickens. But . . NO, I am not going to do that! 🙂