We seem to live in the land of the extremes. Who would think such a place existed where highs in the summer would be 110º – 115º, not counting the heat index, and yet our average winter lows are in the low 30’s but we have to plan on having some night temps that drop into the single digits. We’re currently getting the heating system set up for the greenhouse and though we don’t have many single digit nights, have to have the heating capacity for keeping the greenhouse above 40º on those rare nights.

It’s the same with rain. Extremes! We so rarely get just a nice soaking rain. We either have 5″ rains, or 8″ rains or . . no rain for months. The first week in July, we got an 8 – 10″ rain during the night and now we haven’t had a drop since. We had such a wet spring and early summer, and then that great rain in early July and had more green than we’ve seen in our four years here. With absolutely no rain for two months, everything was so dead and since there had been so much more green than normal, it appeared to be even more brown and dead than our previous summers here.

We had rain forecast for last night and today. One spot I looked said to expect .05″ of rain. That’s not more than a light drizzle. One place I saw was predicting “significant” rainfall.

I seem to have a knack for planting my garden right before a gully washer and seeds and sprouts wash right down the slight incline in the garden. A couple of years ago when everything washed away, I had Vince get some plastic landscape edging and I was going to try to slow the water down but . . the edging has been lost in the clutter. Monday my friend and I planted a fall garden so I was hounding Vince to find that edging and get it up to slow the run off in the garden. He decided it was easier to buy some heavy duty plastic edging and line the walkway in the garden and protect the newly planted area so it was dark last night before Vince finished getting it all setup. 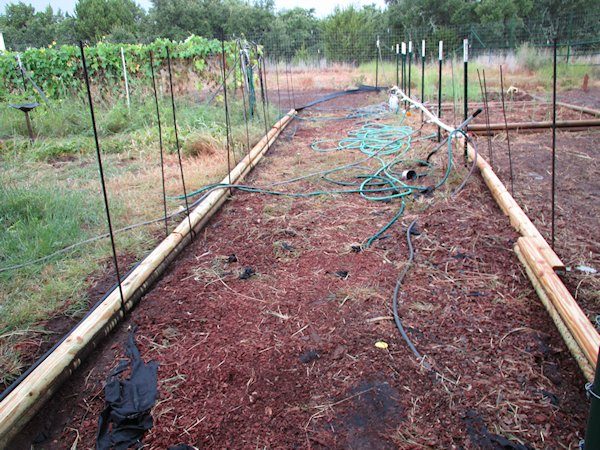 I know he was thinking it wasn’t going to rain and all his rushed, late evening work was going to have been done for nothing. I was thinking . . I’ve moaned and complained . . I hope for my sake that we have a good rain! When we woke up, he said “It rained . . for half a minute!” and that was his way of letting me know he had wasted his time last night, but . . the rain wasn’t done! By mid-morning it was raining again and it rained a lot in a short time. 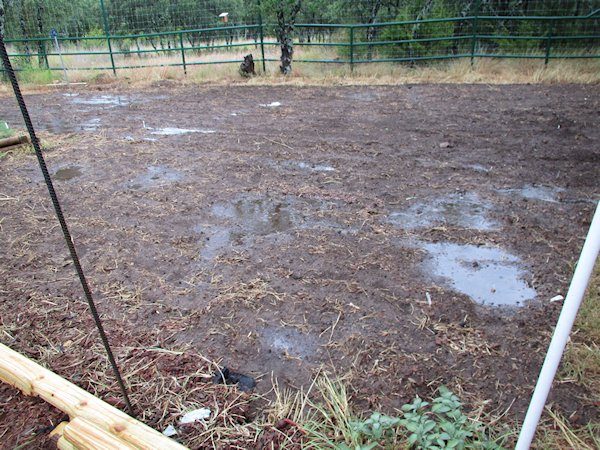 Water was standing in the area that’s newly planted but I don’t think any water went rushing across it that will cause the seeds to wash away. Time will tell. 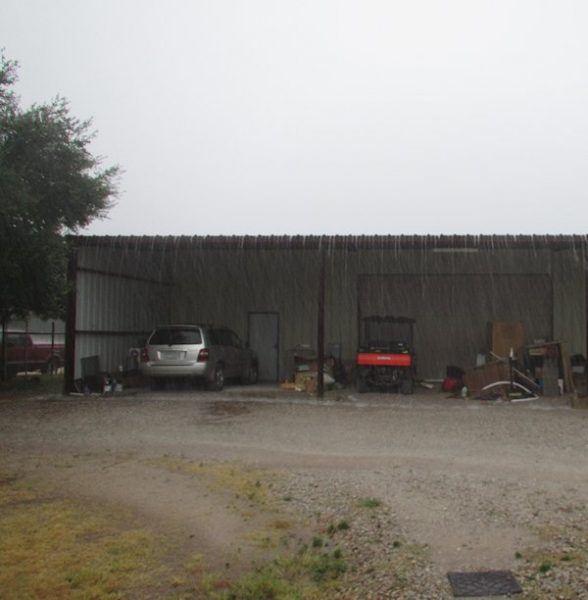 We got just a bit over an inch of rain in just a few minutes. There was a lot of water coming off that metal roof.

This area is so thankful for that bit of rain and there’s more in the forecast. Not only did we get rain but it’s about 25 degrees cooler today than it was yesterday. I am claiming the rain and cooler temps today as the end of the miserable heat/dry of summer. I hope I’m right!