Some will remember my Christmas gift from 2010, and since we don’t usually buy each other gifts, I should be thankful, and I am . . maybe. If you read that blog post, you’ll see that he had been extremely extravagant that year because, so unlike Vince, he bought me a birthday and an anniversary gift that same year. All three gifts had been the green Ryobi weed whackers. I never did figure out why he thought I needed three of them, all in the same six month time frame but I have an inkling that it was because he got them all on clearance.

Earlier this week he said “I bought you something!” Really? Of all the crazy things I thought of, I never once thought it would be ANOTHER Ryobi weed whacker! 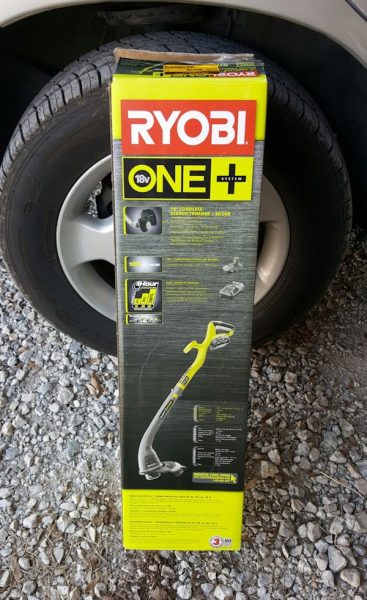 Yep, another weed whacker!  My mom taught me to be grateful and considerate and even when you get a gift that may not be exactly what you were hoping for . . say thank you and show appreciation. This is the fourth weed whacker . . do I still have to show appreciation?  🙂 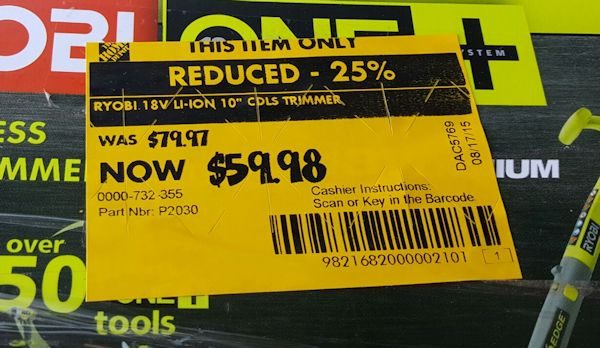 He cannot pass up that clearance sticker! Those stickers grab hold of him and will not let go til he puts the item in his cart. My guess is .. the whole time he was putting it in the cart, checking out and coming home, he was probably thinking .. she isn’t going to be happy! I thought it was kinda funny because really . . how many of these things is he going to bring home?

Seriously, the only thing I really thought about was:  Poor Chad . . some day he’s going to be going through our stuff and he’s going to be so mad at Vince for buying so much of this stuff. Hopefully Nicole will be happy with me because she’ll get lots of fabric, yarn, sewing machines and hopefully a bit of canned food. See . . I can justify all my excesses and I can just keep right on buying without any guilt.