This is a sad story so if you’re already feeling down . . pass on by and don’t stop and read this one. It’s a chicken story so at least it isn’t a human story.

One of the Ancona hens was sitting on 8 eggs. I went out there one day to check on them and there was one baby hatched, a cute little fuzzball. That evening Vince went out with me and I told him I didn’t think the chick looked very good and by the next morning . . it was gone. No sign of it anywhere. Then the hen wasn’t sitting on the other eggs and ants had invaded the nest (which may explain what happened to the baby) so I fixed up a box and put wood shavings in it and moved all the eggs in there and sprinkled DE all around the floor where I was putting the box, to hopefully kill all the ants. Later I checked on them and the mom still was not sitting on the eggs so looked at all of them and two had started to pip so I took them and put them under one of the bantams that’s sitting on eggs. By late evening one of those had hatched and it was doing well but later when I checked, the bantam hen had thrown it out on the coop floor . . no longer in the nest.

By then, it was dark so I set up the brooder in the shop and moved that baby in there but the next morning I noticed that his feet aren’t right. He still can’t stand up. It has curled toes and a bit of spraddle leg so Vince worked on it. 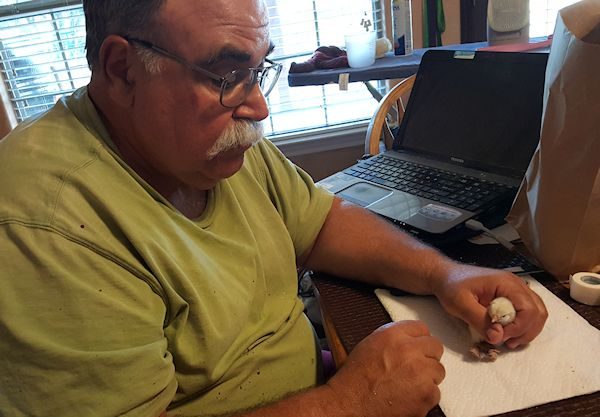 Vince and the Chicken

There was another chicken that had pipped and the ants found them in the new nest, ants crawled in the hole and that little chick didn’t make it.

None of the other eggs hatched and so far, the chick Vince worked on is still alive. I think it was a combination of horribly hot weather, a less than dedicated hen and the ant invasion that made for a frustrating few days. We didn’t need any more chickens but it surely was disappointing the way this hatch turned out.

OK . . back to happier days and stories!