I’m so happy to have a knitting daughter-in-law! We’re able to talk about knitting, plan our projects together, knit when we’re together. I’m just happy to have Nicole for a daughter-in-law .. whether she knits or not. I can’t imagine that I would have had a daughter that I’d enjoy more than I enjoy Nicole. Sometimes I feel a bit bad because I seem closer to Nicole than to Chad but it’s just because Chad is so busy with work and when he isn’t working, he wants to spend time with Nicole and Addie without my interfering, and then there’s fishing and hunting so somewhere way, way down his list of priorities is . . MOM!

Nicole was telling me yesterday that she wants to make Zilver and we were talking about yarn choices. I mentioned that I thought it would look better in a solid-ish yarn . . at least the pattern will show up better.  Then I said . . wait! You’ve never used Wollmeise so this morning I pulled some Wollmeise and she’s going to decide which one she wants. 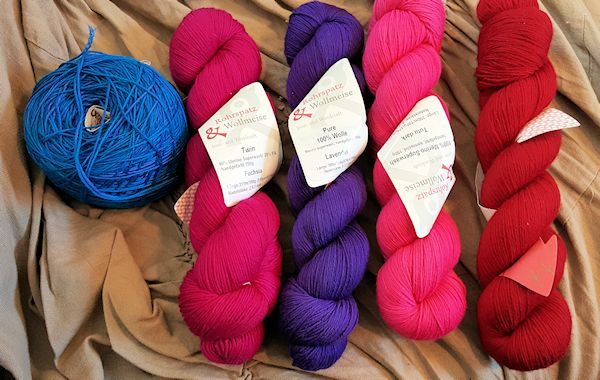 She also may want to do Hitchhiker. I’ve made one and gave it away and I’d like to make another one. I pulled some non-solid Wollmeise and she can pick one of these for Hitchhiker. 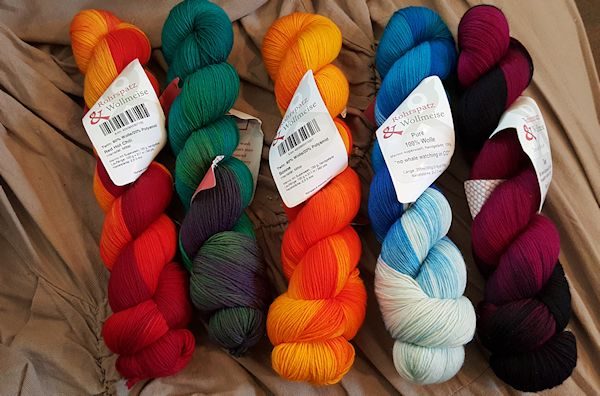 Who wants to guess which ones she’ll choose.  I’m not going to say my guess but I’d love to hear your guesses . . and it’s purely a guess because if we’re talking about her favorite colors . . orange! Her least favorite – purple.