Last night while I was watering my plants on the side of the house, Vince was trying to get close to the cat. He had a bag of treats and the cat was hiding behind the weeds but she wanted no part of being friendly. 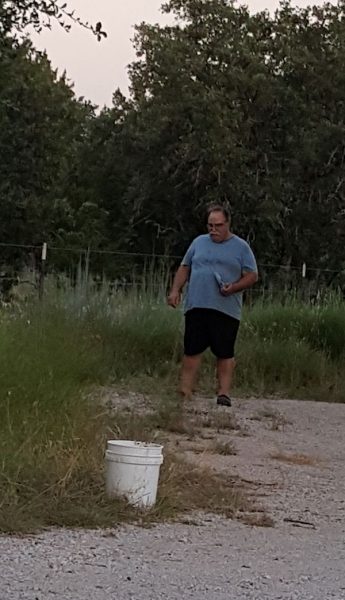 Treats for the Cat

When Vince went out to put food in her bowl, he saw a black spot in the weeds so he went back and got treats and thought he could bait her into coming out but she ran deeper into the woods and as long as we were anywhere outside, she was not coming back.

When I went out this morning, her bowl was empty, so either she got it or something else ate it. Anything is possible around here.

This morning she was squatted down behind the well house. I talked to her and she didn’t run off but she didn’t come close to me. In the mornings I can get about 8 feet from her but in the evenings, she seems to want to keep a little more distance. I guess she’s hungrier in the mornings.

Vince is still determined she’s a boy. Vince was saying “he” this morning and I said “You know it’s probably a ‘she’.” He said “We don’t know that!”  Odds are 1 in 3,0000 it’s a boy and he’s holding out hope!  I guess that’s a good thing but I’m going on the basis that it’s a she and if we don’t catch her soon and get her to the vet, we’re going to have kittens and we do not want that!