I sometimes do a terrible job of answering your questions so any time I don’t answer you, just holler at me . . I’ll do it . . I just forget. Here are some recent questions/discussions about your questions.

1.  Do I spray my peaches and do I water all year?

Yes, I spray but I only spray with Neem oil.  There are a lot of varieties but this one is cold pressed and organic. You can read more about it here. It sounds almost too good to be true but honestly, you saw how great my peaches look. One of the drawbacks is that is has to be re-applied after a rain but since normally it never rains here, that’s not a problem for me. Some of my first peaches to ripen did have bugs munching on them but those got ripe the end of May and it rained almost the entire month of May so all my Neem would wash off, or I just wasn’t wasting it while we were having so much rain.

I feel completely safe using it and it isn’t supposed to be terrible for bees but I still try to apply it very early in the morning (just as it’s getting daylight) or very late in the evening.

As far as water, yes, we do have to water all year here.

2. When did I plant my ginger?

It was in April that I cut up some storebought ginger and planted it. That’s the batch shown in this morning’s picture. You can read about it on this blog post. 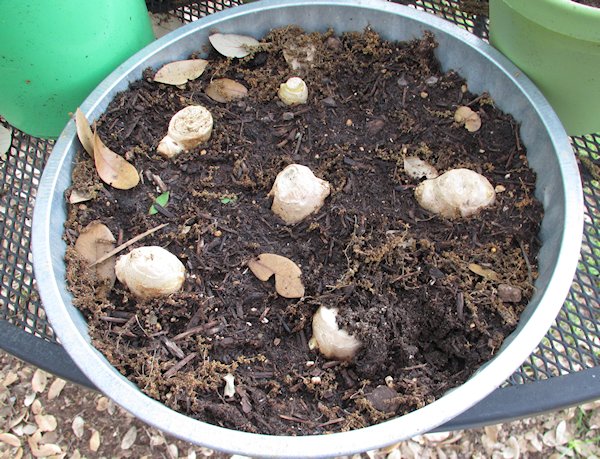 You can see from the picture that I placed the chunks on top of a mixture of potting soil and compost and kinda pressed it down . . didn’t cover it with dirt.  Of the six I tried to root, 4 sprouted and 2 did not. They never really grew roots but simply had shoots that sprouted up from the top. Then I took those chunks/shoots and planted them in the long pot shown this morning. 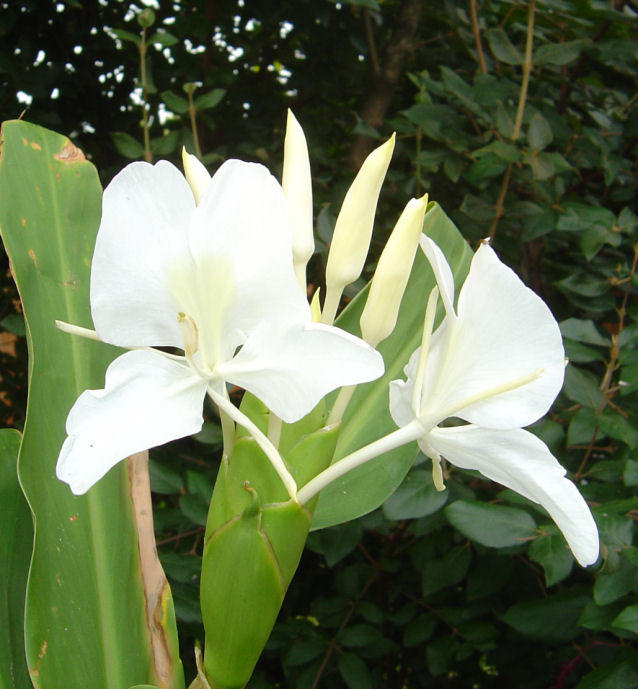 The edible ginger will bloom, but rarely and it isn’t particularly pretty. The plant shown above is what I’ve always called a ginger lily and it smells amazingly good and though the root is a bit “rhizomy” and resembles edible ginger, the root of the plant shown above is not edible. So .. not all ginger is created equally. This is a blog post I did way back in 2005 about growing ginger lilies. In Kentucky and Missouri, I had to dig them up for the winter. I’m going to get more and try to cut them back and mulch them here and see what happens. They probably smell better than any plant I’ve ever grown.

4. Where did I get the turmeric and what will I do with it?

I bought fresh turmeric root at a health food store in Abilene. It was outrageously expensive . . something like $17/pound as I recall, but a little goes a long way. I will use it in any recipe that calls for turmeric. Turmeric is supposed to have all kinds of healthy benefits and I should probably use it more than I do. I’m anxious to see how the fresh tastes.

5. When will I wear all the sweaters, scarves, etc. that I’m making?

Hey . . I heard there’s an ice age coming. It may get cold in central Texas! Seriously, we do have winter . . just a few days here and there. We get ice, but rarely snow, which means when there’s ice, I’m not leaving the house, so I may have to dress up in my sweater and scarf and stay home!  We do have more winter than people think we do. It’s mostly in January and February and we may have 3 or 4 days in the low teens or single digits and then we may have 3 or 4 day sin the 70’s. It’s a good way to enjoy winter . . if we could just do something about these miserable summers!

OK . . if there were more questions that I didn’t answer, please comment here and I’ll answer those questions.