Probably, I shouldn’t feel bad that I may have just turned my back on my beloved Blue Bell ice cream but dang it . . they need to speed things up and get Blue Bell back before summer is over!

I never thought much more about it til this week when United had it on sale . . buy one/get one free. 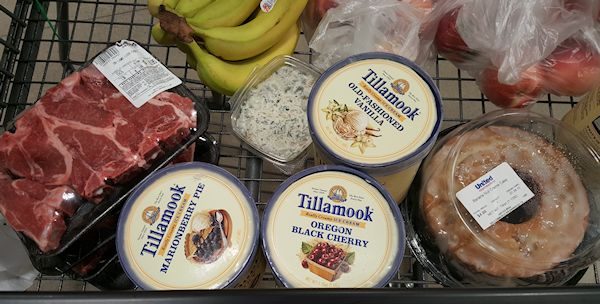 I’m sure United has had Tillamook since they opened but . . well, we’ve been on Weight Watchers and I had no reason to go down the ice cream row. We actually had four cartons (buy 1/get one 1 free . . you can’t buy three . . or one . . or two . . apparently! The other flavor is Oregon Blueberry.

Last night we tried the Oregon Blueberry. While Vince was eating it, I’m guessing at least 10 times he said “Damn! This is so good!” It could be (1) better than Blue Bell or (2) we just haven’t had good ice cream in what seems like forever so it seems better than Blue Bell.

And . . what about that cake in the cart? There is some fruit and . . you’ll see those lamb chops. Still showing $5/pound on the package but ringing up at $9.99/pound but only showing half the weight so we’re still getting them for $5/pound.

Tonight we’re having lamb chops and grilled salmon. I love eating at my house!