There’s a new feed store in town . . a guy who has all kinds of feed and deer stands and blinds, feeders . . he’s a real nice guy. We wanted to support him so we bought a bag of chicken feed from him and the chickens seemed ok with it so we bought several more bags. Then, I noticed that the main laying hens weren’t laying. From 13 hens, even with it being this hot, I should be getting 7 or 8 eggs per day. Some days I was getting two, every now and then I’d get three eggs. I told Vince . . I don’t think the chickens like the new food. He said . . I don’t even think they’re eating it. When they’re out, they mostly eat bugs anyway but for a couple of days last week, they weren’t out and they weren’t eating so, we dumped all that, went and bought the old food from Tractor Supply and three days into the food change, I’m still only getting three eggs per day from those 13 hens.

The other chickens seemed to be laying ok . . not great but not as bad as the red hens. Then I noticed . . I haven’t had any Ancona eggs lately. There are 5 hens in that coop – 3 Dominiques and 2 Anconas. The Anconas lay white eggs that are medium and kinda pointy on one end. There’s an Ancona rooster in there and I was hoping to get some more Ancona hens. They’re pretty and . . they’re Italian so Vince wanted to keep them. They typically lay 2 or 3 eggs per week but it’s been a while since I got an egg from them. Saturday I mentioned to Vince . . I don’t know how long it’s been since I’ve had an Ancona egg. He said . . if they’re not going to be decent layers, we don’t need to keep them.

For the past week or so, since I injured my foot, I haven’t even bothered to count heads at night . . just close them up and be done. There’s a place in the far corner, under the coop, but inside the fence where nothing can get to them and yesterday I happened to look under there and saw this: 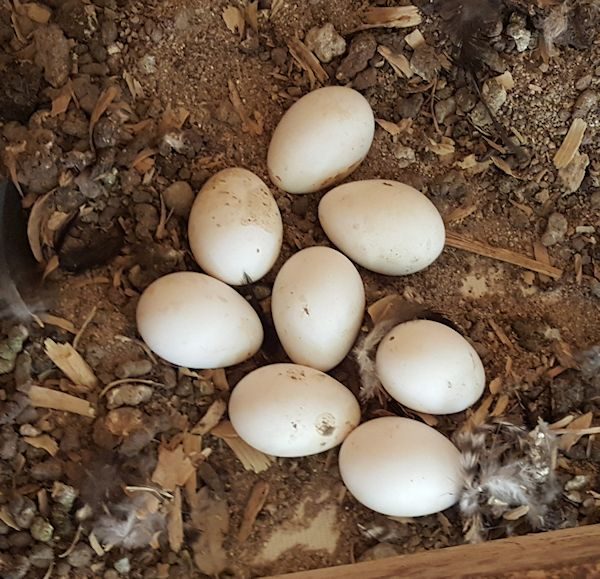 That explains why I’m not getting any Ancona eggs! That’s probably two weeks worth of eggs from those two Ancona hens, though I’m not sure if just one hen is doing all the laying or if they’ve combined their efforts. Heck, I should look around .. there may be another nest.

I guess if these hatch, our chicken numbers are going to be expanding. 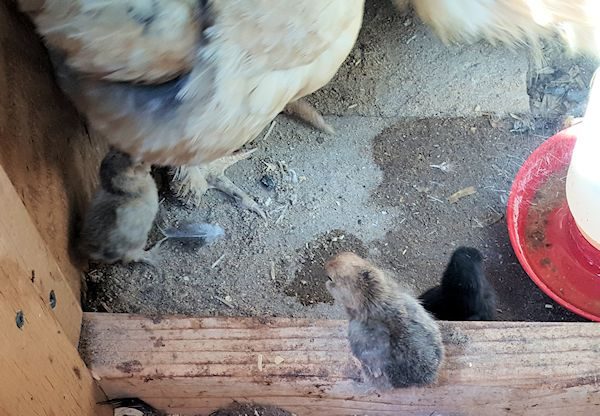 It’s kinda hard to get a picture of these but three hatched the end of last week. That’s a total of 7 that have hatched in the past few weeks . . now with these Anconas . . oh, my . . we have too many chickens!

The bantams I could have stopped just by taking their eggs but they were so determined, I gave up and let them hatch the babies. The Anconas . . I had no idea they were nesting so you can’t blame me.

I do need to get those eggs up and into the coop in a nesting box but that’s a project for a morning when it’s cool and Vince is home to help.