Poor Vince. He has spent the entire weekend updating and cleaning up computers. Here he sits on Sunday afternoon. 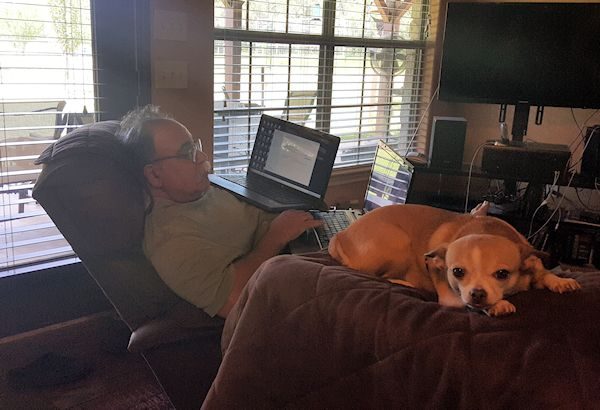 I asked him . . are there 6 computers that have Windows 7, 8 or 8.1 that need updating . . because at some points, he’s had 3 or 4 computers on the table and several by his chair . . working on them all. He said “At least that many!” I have my old one and my new one so don’t ask me why there are so many others. Some of them have been just sitting on the desk and had 150 updates so it’s taking forever!

It’s always nice to have Rita supervising too! She’s such a funny little dog. I wonder if someone misses her!

It has been miserably hot here this weekend so it was good that there were inside projects to keep Vince occupied. And, I’m so glad he’s good with computers because I would never ever have gotten my computer updated by myself. Vince is just pretty handy to have around . . I think I’ll keep him!  🙂